Median value of bank appraisals on housing in the Autonomous Region of Madeira decreased when compared with the previous month, but increased year-on-year

According to data released today by Statistics Portugal (INE), in June 2021, the average value of bank appraisals on housing in the Autonomous Region of Madeira reached €1 210/sq meter, decreasing by 0.5% from May 2021 and increasing by 6.1% from the year-ago month.

Besides Funchal, in the month in reference, only the municipalities of Santa Cruz and Câmara de Lobos exceeded the minimum number of registered observations (33). Their bank appraisal values stood at €1 113 /sq meter and €1 087/sq meter, respectively. The municipality on the east side of Madeira Island registered a monthly decrease of 1.2% and a year-on-year increase of 5.5%. Câmara de Lobos maintained the same value as the previous month. 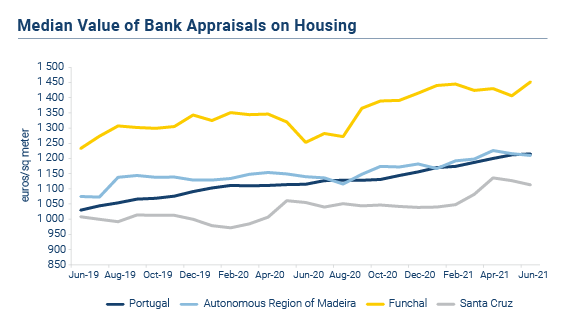