On their internet website, 66% of the public agencies of the Regional Public Administration provided forms for download, 48% allowed forms to be filled in and submitted online, 46% had online free distribution of services or goods in digital format while 14% used that resource to conduct surveys. 23% of the websites made possible for users to report their satisfaction levels and 18% had a virtual service desk.

In 2020,11% of the public organisations of the Autonomous Region of Madeira used e-commerce to order goods or services, the highest percentage in the last eight years. The most commonly used platform for placing orders for goods and/or services through e-commerce was the email (50%). The main reason given for the non-use of electronic commerce was because it was “not adjusted to the public agency profile” (38%).

14% of the public organisations in the Autonomous Region of Madeira recruited or tried to recruit ICT specialist staff in 2020. Of these, 50% experienced difficulties in filling that type of job position. The main ICT functions performed by internal human resources were the support to web applications (36%) and support to software/management systems and the development of web applications (27%).

21% of the public authorities of the Autonomous Region of Madeira analysed big data in 2020, the highest value of the short time series of this variable, being more than twice than in the previous year (9%).

Regarding the source of data used in this type of analysis, 67% of those public organisations used data generated from digital media (social media), 25% by their own data from smart devices or sensors and 17% by other Big Data sources. 75% of public agencies conducted Big Data analysis using their own staff and 42% contracted external providers.

In the field of cybersecurity, all public organisations have antivirus and firewall software. Security measures such as authenticating users using a secure password and regularly updating software are also widespread.

In 2019, the Regional Public Administration total ICT expenditure stood at €7.2 million, growing by 91.9% compared to 2018, driven by the increase in capital expenditure, which amounted to €6.4 million, more than doubling compared to the previous year (€3.1 million). In turn, current expenses were around 776.7 thousand euros, representing an increase of 16.3% compared to 2018. 74.8% of capital expenditure corresponded to the acquisition of equipment and software licensing, while the main share of current expenditure relates to equipment support and maintenance, network maintenance, communications consumption and leasing of communications circuits and costs with cloud services (75.7% in overall)

In 2020, all Municipal Councils in the Autonomous Region of Madeira had internet access (broadband) and presence on the internet. Compared to 2019, it should be noted the growth in the percentage of Municipal Councils using video-conference systems, which increased from 55% in 2019 to 73% in 2020.

The number of Municipal Councils of the Autonomous Region of Madeira that uses e-commerce remained unchanged, with only 3 of the 11 Councils in the Region using this feature. It should be noted that public consultation of processes on websites was allowed by 82% of the Municipal Councils.

In turn, in 2020, only 5 of the 11 the Municipal Councils of the Autonomous Region of Madeira allowed the submission of online forms, representing a percentage of 45%, which compares with 71% in the country. 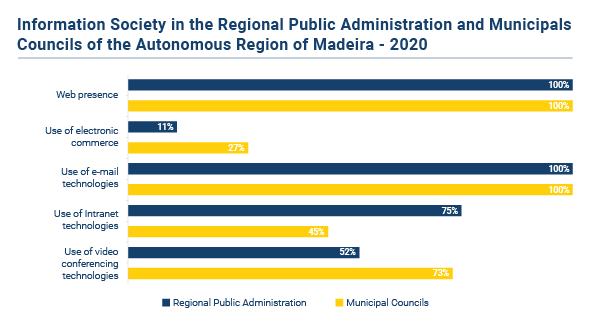