Passenger movement in the airports of Madeira rose compared to the corresponding period of 2017; traffic of goods in the regional seaports increased

According to the data compiled by DREM, the passenger transport by bus in the reference period stood at 6,4 million.  Between January and March of 2017, 4,3 million passengers were counted in the urban lines (year-on year change rate of +2.0%) and 2,0 million in the intercity lines. Due to the fact that the survey now includes the transportation company of Porto Santo the year-on-year change rates are not available for the total and for the intercity lines (i.e, there is a break in the time series).

In air transport, the airports of Madeira and Porto Santo recorded a movement of 685.0 thousand passengers during the 1st quarter of 2017, a 10.3% increase compared to the same period of 2016.

In sea transport, the Ports authority counted 74 cruise ships in the seaport of Funchal in the 1st quarter of 2017 (down by eighth over the corresponding quarter of the previous year), while the number of transit passengers dropped by 18.5%. The seaport of Funchal received a total of 139,233 transit passengers, the majority of them (93.7%) Europeans. Between January and March 2017, there were more Germans visiting Madeira aboard cruise ships (68,854, year-on-year change rate of -10.0%), followed by the British (43,367; -28.0%) and the Italians (3,930; -27,4%).  An additional remark to the passenger movement in the Madeira – Porto Santo sea line, which went up by 1.9% year-on-year. 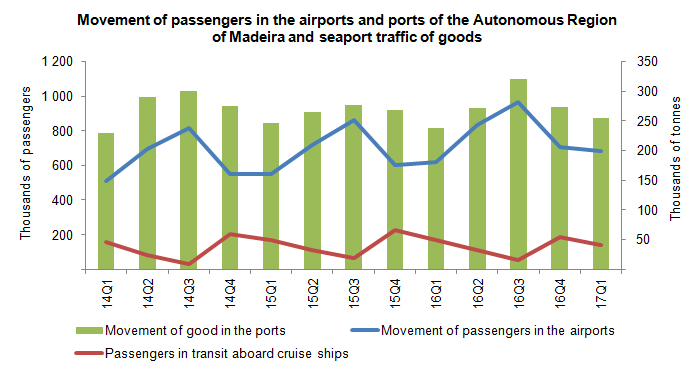 Vehicle sale registries made by the Vehicle Registration Offices of Madeira in the 1st quarter of 2017 rose by 12.1% year-on-year

DREM also releases today the publication “Transport statistics for the Autonomous Region of Madeira-2016” with data for land, air and sea transport.