[NOTE: Number of passengers in intercity lines was corrected on the 28th August 2017]

Passenger movement in the airports and cargo handled in the seaports of the Autonomous Region of Madeira increased year-on-year; cruise ships and passengers in transit decreased

According to the data compiled by DREM, the passenger transport by bus in the reference period stood at 12.5 million. Between January and June of 2017, 8.5 million passengers were counted in the urban lines (year-on-year change rate of +0.3%) and 4.0 million in the intercity lines. Due to the fact that the survey now includes the transportation company of Porto Santo the year-on-year change rates are not available for the total and for the intercity lines (i.e, there is a break in the time series).

In the air transport domain, the airports of Madeira and Porto Santo recorded a movement of 1.6 million passengers during the first half of 2017, a 11.3% increase compared to the same period of 2016.

In sea transport, the data from the Ports authority show that the number of cruise ships in the seaports of Autonomous Region of Madeira (131) dropped by twenty one in the first semester of 2017, when compared to the first six months of the previous year. The number of transit passengers also decreased by 17.5%. The seaport of Funchal received a total of 231,635 transit passengers, the majority of them (88.1%) Europeans. Breaking down by nationality, it should be highlighted that the Germans ranked first during the reference period (93,941, year-on-year change rate of -10.6%), followed by the British (77,760; -25.7%) and the Americans (14,785; -19,4%). On the other hand, the passenger movement in the Madeira – Porto Santo sea line went up by 14.6% year-on-year.

Regarding the movement of goods in Madeira's ports, the statistics for the first half of 2017 show a positive trend vis-a-vis the same period of 2016 for both the unloaded (+9.8%) and loaded goods (+7.6%). 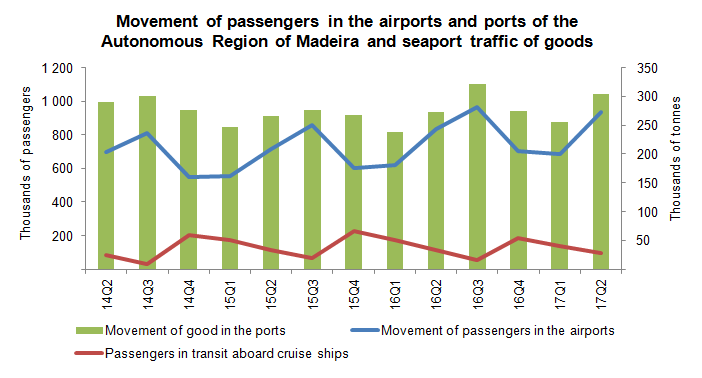 Vehicle sale registries made by the Vehicle Registration Offices of Madeira in the first half of 2017 increase by 12.3% year-on-year

In the first half of 2017, the Vehicle Registration Offices of Madeira registered the sale of 6,958 vehicles (new and used), 85.3% of which were light passenger vehicles and 13.8% light cargo vehicles. The sale of 58 heavy vehicles (0.8% of the total) was also registered during this period. The number of registries rose by 764 compared to the same period of 2016 (+12.3%).