Passenger movement in air and land transportation in the Autonomous Region of Madeira increased compared to the corresponding period of 2016. Movement of goods in the ports decreased

According to the data compiled by the Regional Directorate of Statistics of Madeira (DREM), the passenger transport by bus in urban lines decreased by 0.3% year-on-year in the reference period. Between January and September of 2017, 12.5 million passengers were counted in the urban lines (year-on year change rate of +0.1%) and 6.0 million in the intercity lines.  Due to the fact that the survey now includes the transportation company of Porto Santo the year-on-year change rates are not available for the total and for the intercity lines (i.e, there is a break in the time series). 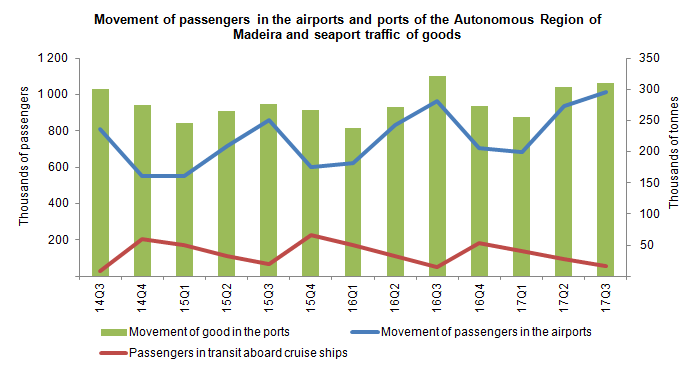 Number of vehicle sale registries made by the Vehicle Registration Offices of Madeira increased by 9.8% when compared to the corresponding period of the previous year

In the third quarter of 2017, the Vehicle Registration Offices of Madeira registered the sale of 3 582 vehicles (new and used), 85.4% of which were light passenger vehicles and 13.5% light cargo vehicles. The sale of 38 heavy vehicles (1.1% of the total) was also registered during this period. The number of registries went up 321 from the  corresponding period of 2017 (+9.8%).

Taking in account the first nine month of 2017, the year-on-year change rate in the number of registries was +11.5%.

The Regional Directorate of Statistics of Madeira (DREM) releases today, on its official statistics website, a time series on Transport Statistics updated with the data for 2016.

The information for the 1976-2016 period is presented in three different chapters: