Movement of passengers in the airports of the Autonomous Region of Madeira increased in all modes of collective transport compared to 2016.

According to the data compiled by the Regional Directorate of Statistics of Madeira (DREM), in 2017, the passenger transport by bus stood at 24.8 million. In the year of reference, 16.8 million passengers were counted in the urban lines (year-on year change rate of +0.4%) and 8.0 million in the intercity lines. Due to the fact that the survey now includes the transportation company of Porto Santo the year-on-year change rates are not available for the total and for the intercity lines (i.e, there is a break in the time series).

In the sector of air transport, the airports of Madeira and Porto Santo recorded a movement of 3.4 million passengers during 2017, a 8.0% increase compared to 2016.

The transport of passengers in the sea line between the islands of Madeira and Porto Santo grew by 7.7%, reaching a total of 338,277 in the year of reference.

Regarding the movement of goods in Madeira's ports, the statistics for 2017 show increases for both unloaded (+4.8%) and loaded goods (+4.4%). 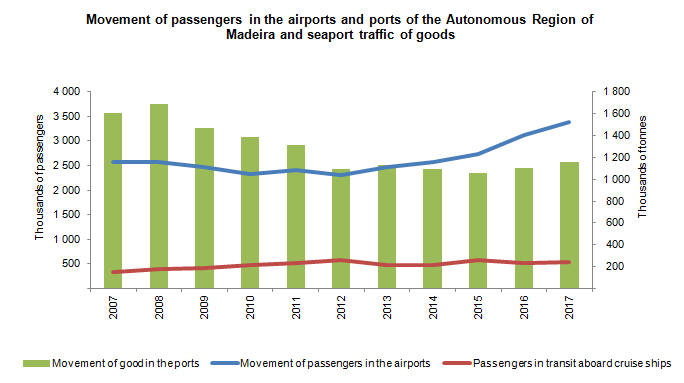