In the first quarter of 2019, and compared to the first quarter of 2018, there was a 5.9% increase in the acquisition of light passenger car by units resident in the Autonomous Region of Madeira (934) and a 12.7% decrease in light cargo vehicles (117). Compared to the same period of last year, the total number of registries went up by 32 (a year-on-year increase of 3.1%).

In the first three months of 2019, the Vehicle Registration Offices of Madeira registered a transfer of 3,463 used vehicles, 85.1% of which were light passenger and 13.8% light cargo vehicles. 34 heavy used vehicles were registered, about 1.0% of total. Compared to the year-ago period, the vehicle sale registries of used cars increased by 16.8%.

According to the data collected DREM from ACAP, in 2018, 67 electrical vehicles were acquired, which represents a 39.6% increase, compared to 2017 (48 vehicles).

In air transport, the airports of Madeira and Porto Santo recorded a movement of 731.5 thousand passengers during the 1st quarter of 2019, a 4.3% increase compared to the same period of 2018.

Maritime transport - Passengers in transit and movement of goods in Madeira’s ports, passengers in the Madeira-Porto Santo sealine and recreational vessels entered in the marinas rose compared to the corresponding period of 2018

The passenger movement in the Madeira-Porto Santo sea line increased by 20.1% year-on-year.

Regarding the movement of goods in Madeira’s ports, the statistics for the 1st quarter of 2019 show a positive trend vis-à-vis the same period of 2018 (+6.6%) determined by the increase (+9.0%) in the unloaded goods, since the volume of loaded goods declined (-8.8%). 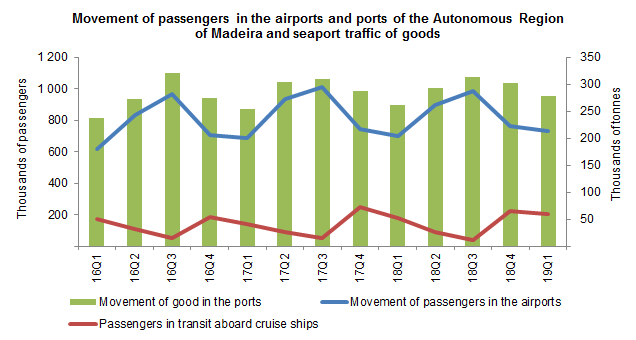 DREM also releases today the publication “Transport statistics for the Autonomous Region of Madeira-2018” with data for land, air and sea transport.