According to the data compiled by DREM, the passenger transport by bus in the reference period stood at 6.2 million, up by 6.2% year-on-year. Between January and September of 2019, 12.8 million passengers were counted in the urban lines (year-on year change rate of +5.3%) and 5.9 million in the intercity lines (-0.3%).

In the first nine months of 2019, 725 thousand tickets were sold by the cableways installed in the Region, a 4.7% increase from the same period of last year. 92.4% of these tickets were purchased for adults, 4.5% for children and the remaining 3.1% for other type of users (eg: farmers, residents, students, etc…). Total revenue was about € 8.1 million, a 4.1% growth compared to the first nine months of 2018.

The information provided by ACAP shows that in the third quarter of 2019, and compared to the third quarter of 2018, there was a 4.0% increase in the acquisition of vehicles by units resident in the Autonomous Region of Madeira, which stood at  1,302. In light passenger vehicles, the increase was 3.2% and in light cargo vehicles it stood at 24.4%. Between January and September, 3,448 new cars were registered, a decrease of 1.5% compared to the same period last year.

In the third quarter of 2019, the Vehicle Registration Offices of Madeira recorded a transfer of 3,487 used vehicles, 87.7% of which were light passenger and 11.4% light cargo vehicles. 31 heavy used vehicles were also registered, about 0.9% of the total. Compared to the year-ago period, the vehicle sale registries of used cars decreased by 14.8%. In the first nine months, 10,162 records of transfer of ownership of used motor vehicles were carried out, representing a year-on-year change of -6.8%.

In sea transport, the Ports authority counted 14 cruise ships in the seaport of Funchal in the third quarter of 2019 (down by six compared to the third quarter of the previous year). The number of passengers in transit passengers also decreased by 14.7%. Between January and September 2019 the passengers in transit on cruise ships increased by 11.5%, despite the number of cruise ships having decreased by 2 compared to the same period last year. The seaport of Funchal received a total of 347,477 transit passengers, the majority of them (89.0%) Europeans. Between January and September 2019, Germans were the most common nationality among those who visited Madeira aboard cruise ships (43.3%, a year-on-year rate of change of 13.9%), followed by the British (29.1%, -8.3%) and the Italians (3.4%, +43.5%).

The passenger movement in Madeira’s ports concerning Madeira-Porto Santo and Madeira-Portimão-Canarias sea lines decreased by 0.1% year-on-year. The cumulated year-on-year rate of change for the first three quarters of 2019 was 8.1%, representing a total of 601.7 thousands of passengers.

Regarding the movement of goods in Madeira's ports, the statistics for the 3rd quarter of 2019 show a positive trend vis-a-vis the same period of 2018 (+2.3%) determined by the increase in both the unloaded  (+1.2%) and loaded goods (+9.5%). Compared to the same period the previous year, the overall movement of goods for the January to September 2019 rose by 3.9%. The unloaded goods increased by 4.4%, while the loaded goods increased by 1.0%.

In the first three quarters of 2019, 1,489 recreational vessels entered in the marinas of the Region, representing an increase of 4.3% compared to the same period of 2018. These vessels carried 4,018 crew members and passengers, down by 384 from the same period last year. 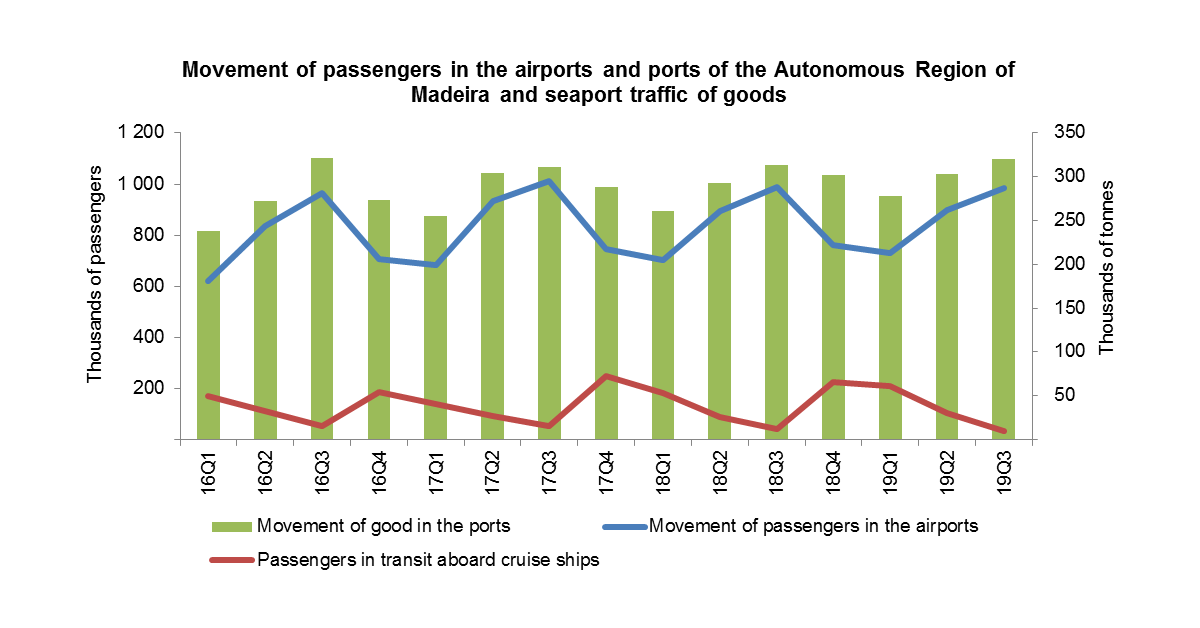 The Regional Directorate of Statistics of Madeira (DREM) releases today, on its official statistics website, a time series on Transport Statistics updated with the data for 2018.

The information for the 1976-2018 period is presented in three different chapters: