According to the data compiled by the Regional Directorate of Statistics of Madeira (DREM), the passenger transport by bus in the reference period stood at 6.1 million. Between January and March of 2020, 4.0 million were counted in the urban lines and 2.1 million in the intercity lines. Compared to the first quarter of 2019, there was an 8.1% reduction in passengers transported in urban lines, a drop mainly determined by the March reduction (-36.6%). For intercity lines, the rate of change is unavailable due to the fact that one of the enterprises has changed the ticketing system, so the data are not comparable to those of the previous year, determining a series break.

In the first three months of 2020, the Vehicle Registration Offices of Madeira reported a transfer of 3,287 used vehicles, 81.0% of which were light passenger and 16.5% light cargo vehicles. 82 heavy used vehicles were registered, about 2.5% of total. Compared to the year-ago period, the vehicle sale registries of used cars decreased by 5.1%.

628 road accidents were recorded with police intervention in the first quarter of 2020, with the number of victims standing at 240 (down by 52 from 2019). Among these, 220 were classified as slightly injured, 18 as seriously injured and 2 as dead victims.

According to data collected by DREM from ACAP, in 2019, 127 fully electric vehicles were purchased by residents, representing an increase of 89.6% compared to 2018 (67 vehicles). 38 plug-in hybrids were also purchased in 2019.

In air transport, the airports of Madeira and Porto Santo recorded a movement of 613.4 thousand passengers during the 1st quarter of 2020, a 16.1% decrease compared to the same period of 2019. Air transport is very much affected by the COVID-19 outbreak, and in March the number of passengers at Madeira’s airports has dropped to about half compared to the same month last year.

Maritime transport - Passengers in transit in Madeira’s ports and passengers in the Madeira-Porto Santo sealine declined compared to the corresponding period of 2019. Movement of goods and recreational vessels entered in the marinas increased.

In sea transport, the Ports authority counted 68 cruise ships in the seaport of Funchal in the first quarter of 2020 (down by 24 compared to the first quarter of the previous year). The number of passengers in transit also decreased 31.3%. Breaking down by month, the data show that the impact of the COVID-19 pandemic was felt also in maritime transport, with March recording a 71.3% drop in the number of passengers in transit compared to the same month of the previous year. In fact, cruise ships were forbid to dock from March,12th on.

The passenger movement in the Madeira-Porto Santo sea line decreased by 40.2% year-on-year.

Regarding the movement of goods in Madeira’s ports, the statistics for the 1st quarter of 2020 show a positive trend vis-à-vis the same period of 2019 (+1.3%) determined by the increase (+1.7%) in the unloaded goods, since the volume of loaded goods declined (-1.1%). 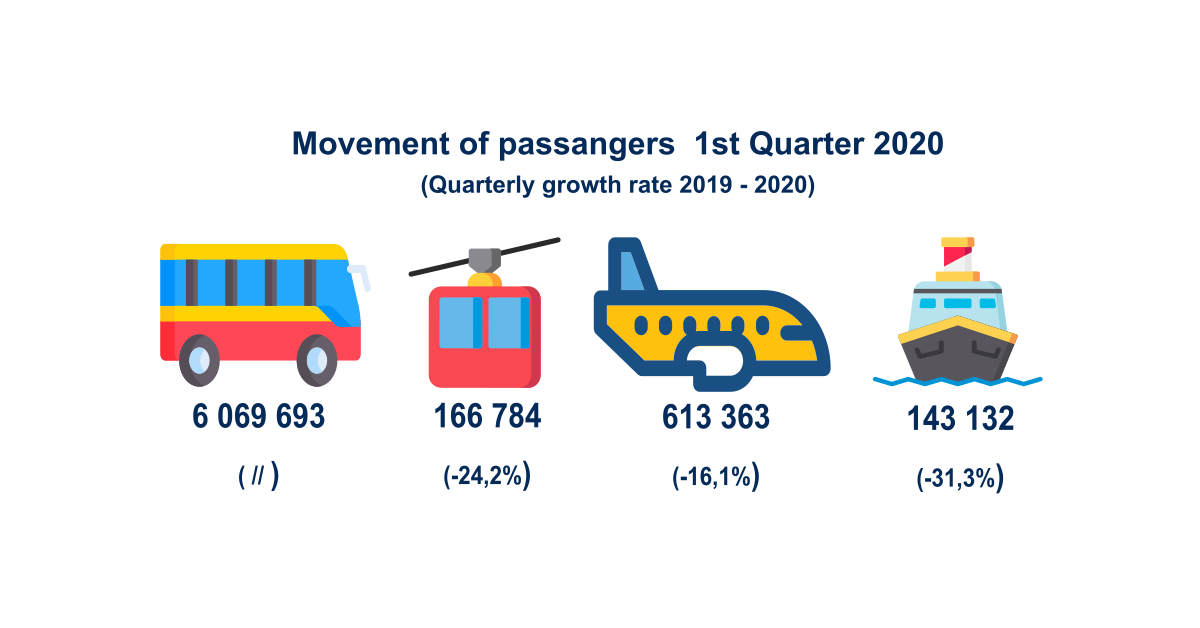 DREM also releases today the publication “Transport statistics for the Autonomous Region of Madeira-2019” with data for land, air and sea transport.