In the month of reference, the number of overnight stays in the Autonomous Region of Madeira stood at 499.0 thousand. Total revenue and revenue from accommodation reached 27.3 and 17.5 million euros, respectively.

In 2019, the main variables of tourism accommodation for the Autonomous Region of Madeira dropped

Taking into consideration the results for the year 2019, the overnight stays decreased by 2.5%, while total and lodging revenue declined by 4.4% and by 4.0% over the previous year. The overnights stood at 8.2 million, while total and lodging revenue reached 407.9 million euros and 268.1 million euros, respectively. The preliminary results show that in 2019, the German market was the most important with 1.9 million overnight stays (-9.1% year-on-year), followed by the British market with 1.8 million bednights (-7.0% y-o-y). The residents in Portugal generated 1.1 overnight stays (+13.5% y-o-y), while the French market accounted for 749 thousand bednights (-5.4% y-o-y).

The data from the Golf Course Survey show that in 2019, the number of rounds played in the three golf courses of the Autonomous Region of Madeira stood at 65,387 (-1.2% compared to 2018). This activity generated 2.5 million euros. 73.1% of those rounds were played by non-members, mainly coming from Nordic countries, Portugal and Germany. 58.1% of the total rounds were sold by hotel establishments and similar, 22.1% by the tour operators and the remaining 19.8% by the golf courses themselves.

According to the data provided by the Port’s authority, 590,766 transit passengers aboard cruise ships were counted in 2019, a 10.0% increase when compared to the same period of the previous year and an all-time record. The number of cruise ships that visited the Autonomous Region of Madeira went up by seven compared to 2018. 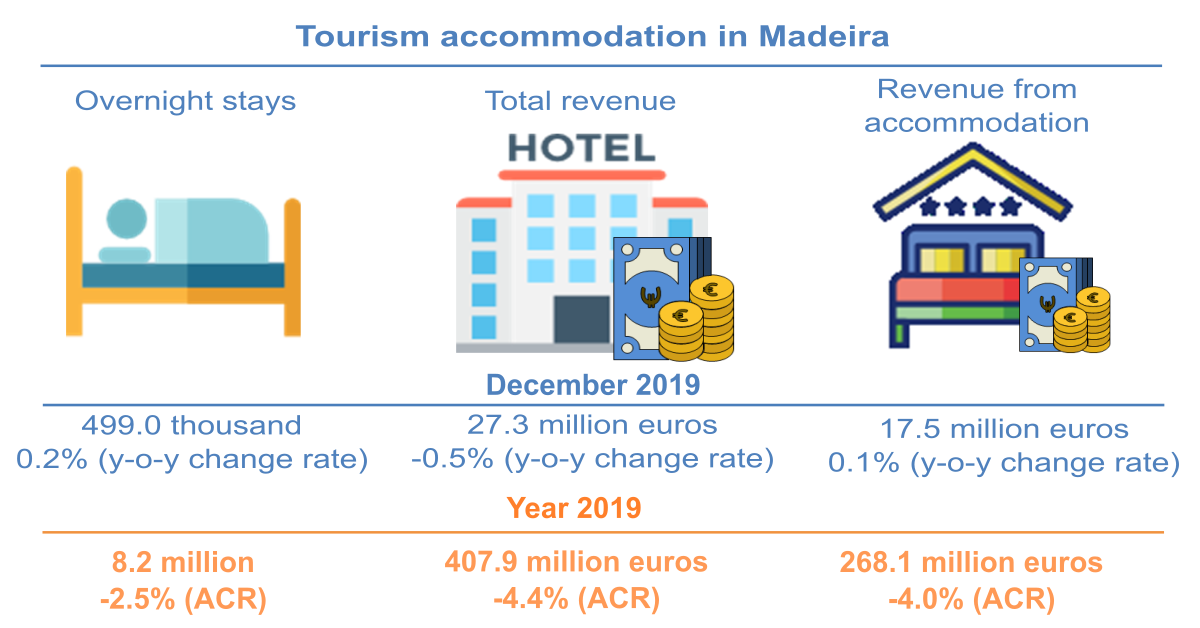