[PREVIOUS NOTE: Regarding the monthly publication of the Tourism data for the year 2021, the Regional Directorate of Statistics of Madeira (DREM) will keep the model followed in the previous year, releasing an aggregate comprising the hotel sector, rural tourism and local accommodation, regardless of the number of beds. In turn, in its releases, Statistics Portugal (INE) excludes local accommodation establishments under 10 beds. In this press release and in the tables published by DREM the overall total for guests and overnight stays is higher when compared to INE’s. For the bed and room occupancy rates and for revenue and personnel costs, the figures of DREM and INE are the same since the local accommodation under 10 beds is not included in the compilation of these variables.]

Number of overnight stays in tourism accommodation in the Autonomous Region of Madeira recovered, standing only 4.4% below the values of the same month of 2019

From January to August 2021, the overnight stays in total tourism accommodation in the Region registered a 31.7% growth compared to the same period of the previous year, reaching around 2.5 million, while total and accommodation income rose by 50.4% and 55.2%, respectively.

Comparing the month of reference with August 2019, the activity in tourism accommodation still shows a decrease of 4.4% in overnight stays, with the German market recording the biggest fall, of -43.3%, followed by the French market with - 38.9% and the British with -1.3%. The Portuguese market maintained the positive change that has been seen in recent months, also surpassing the values ​​of August of previous years (+66.5% compared to August 2019).

The average stay in tourism accommodation, in August, recorded an increase comparing to the same month of the previous year (4.31 nights), standing at 5.13 nights.

The bed occupancy rate in the reference month reached 72.6%, growing by 43.1 percentage points over the same month of the previous year. In turn, the room occupancy rate reached 78.5%. 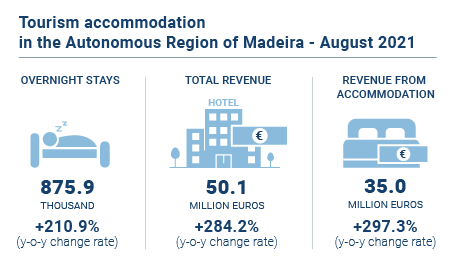