According to the Resident Population Estimates, 253,945 persons were residing in the Autonomous Region of Madeira on the 31st of December of 2018, which represents a negative change rate of 0.2% when compared to same date of 2017. Of that total, 118,585 were men and 135,360 women. The population of the Region has been dropping consecutively since 2011, although the net migration surplus recorded in 2017 and 2018 – which resulted from the return of Madeiran emigrants in Venezuela to the Region - softened this decline.

The municipalities of Santa Cruz (7.4‰) and Porto Santo (0.6‰) were the only in which the crude rate of population change was positive, while the lowest values in this variable were registered in the municipalities of Machico, Santana and Porto Moniz (-8.8‰, -8.6‰ and -8.5‰, respectively). 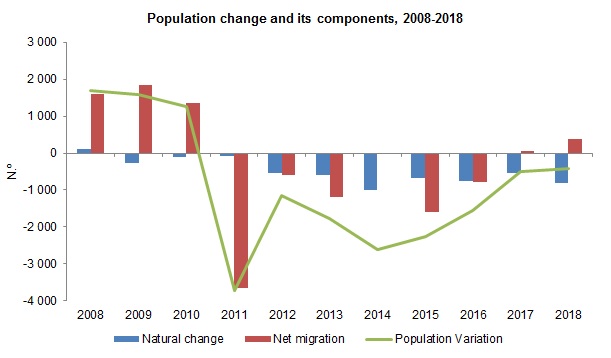