According to the estimates made by the Regional Directorate of Environment and Climate Change (DRAAC), the overall production of waste in 2021, in the Autonomous Region of Madeira, was around 248.6 thousand tonnes, a value that was 34.8 thousand tonnes lower compared to the previous year. This decrease of 12.3% is mainly explained by the reduction in disposal of aggregates in Madeira Island (-35.0%) and excluding this type of waste in the whole region, the change in the overall waste production would be positive by 5.1%.

A substantial part of the overall production is related to the waste sent to the Waste Treatment Plant of Meia Serra, which amounted to around 132.7 thousand tonnes, +4.3% than in the previous year, showing an increase in organic recovery (waste sent for composting), which quadrupled.

In terms of recycling carried out in the Autonomous Region of Madeira, emphasis was given to 1.7 thousand tonnes of scrap (+18.9% than in 2020) and to plastic (309 tonnes, +134.5). There were also 131 tonnes of by-products from the sugar cane and wine industry. 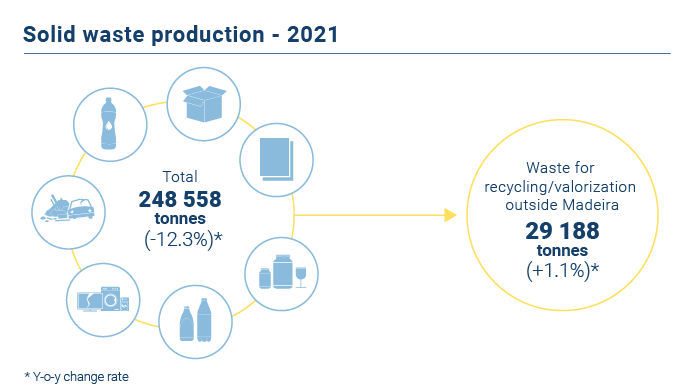