DREM expands the time series on weather data, also updated with information for 2019

The Regional  Directorate of Statistics of Madeira (DREM) releases today on its website the “Time Series on Weather Data”, updated with information for 2019. However, besides this update, a whole new set of information, provided by the Madeira Delegation of the Portuguese Institute of Ocean and Atmosphere (IPMA) was included in this time series.

With the present release, data for temperature and precipitation, more detailed and for all the weather stations of the Autonomous Region, is now made available. Data concerning relative humidity, sunshine hours, sea surface temperature, wind speed and direction, ultraviolet radiation and extreme events was also included.

Mean air temperature higher than in 2018 in almost every station

Low precipitation in all weather stations

Regarding annual precipitation, the lowest values were recorded in Funchal/Lido (124.0 mm) Ponta de São Lourenço (194.6 mm) and Funchal/Observatório (244.5 mm, the lowest since 1976, the first year of this time series). The highest value was measured in Achadas da Cruz/Lombo da Terça (1.176,1 mm).

In a general way, December was the wettest month. The highest value of precipitation was recorded in Pico do Areeiro (319.1 mm) and the lowest in Funchal/Lido (32.1 mm). On the contrary, August was the month with less precipitation. 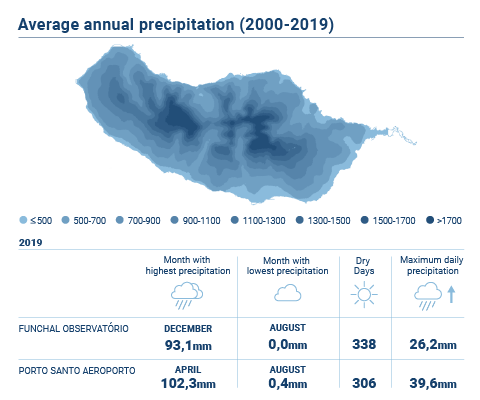 Extreme events – More tropical nights than in 2018 in most stations

In 2019, Funchal/Lido was the station with the highest number consecutive dry days – 87. On the contrary, Santo da Serra and Achadas da Cruz/Lombo da Terça recorded the lowest number, 10 and 12 days, respectively.

During the year 2019, only 3 stations had days with mininum temperature equal or below 0 ºC. The Pico do Areeiro station recorded 26 days in that condition, Bica da Cana 8 days and Chão do Areeiro 4 days.

In 2019,  in 14 of the stations of the Autonomous Region of Madeira there were tropical nights (nights with minimum temperature above 20 ºC). The weather station of Funchal/Lido stood out, with 120 days, followed by Lugar de Baixo with 104 days and Funchal/Observatório and Santa Catarina/Aeroporto, both with 97 days.