According to information released today by Statistics Portugal (INE), in the 2nd half of 2021 (last 12 months), the median house rental value of the 1,221 new lease agreements of dwellings in the Autonomous Region of Madeira was 6.33 euros/m2, the highest value in the existing short time series. Compared to the previous semester, the agreements declined by 8.7% and the median house rental value rose by 2.9%. By the same order, this represents a -5.1% and +5.7% growth when compared to the 2nd half of 2020.

Regarding house rental value by square meter, the Autonomous Region of Madeira was the fourth Region with the highest value among the 25 NUTS III regions, behind Área Metropolitana de Lisboa (8.90 euros/m2), the Algarve (6.85 euros/m2) and Área Metropolitana do Porto (6.51 euros/m2). The national average stood at 6.04 euros/m2.

Given the minimum number of 30 transactions established for dissemination purposes, the information is only available for the municipalities of Funchal, its contiguous municipalities (Câmara de Lobos and Santa Cruz) and Calheta. In the year of reference, Funchal concentrated 818 of the 1,221 lease agreements, followed by Santa Cruz with 177, Câmara de Lobos with 56 and Calheta with 48. 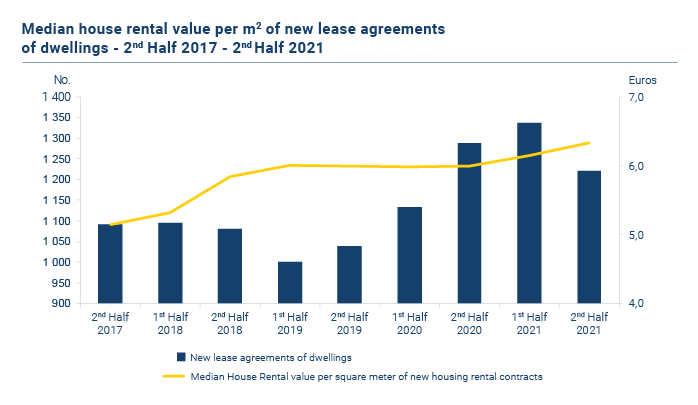