In 2016, the value of performed works by construction enterprises headquartered in the Autonomous Region of Madeira amounted to 315.6 million euro, a decrease of 3.6% compared to 2015. This drop was mainly caused by the decline of the “civil engineering” works by 22.3%, since that the value of  “building” works rose by 38.5%.

The construction companies with 20 or more employees were responsible for 71.6% of the total value of the performed works, generating 225.9 million euro, a 10.7% decrease compared to 2015. In this group of companies (i.e. with 20 or more employees), the “civil engineering” works were the most important (69.8% of the total), representing 157.8 million euros (down by 22.8% from the previous year). This decrease was mainly due to the decline in the works related to "motorways, roads, streets and ways" (-21.8%, corresponding to a 34.0 million euro drop). 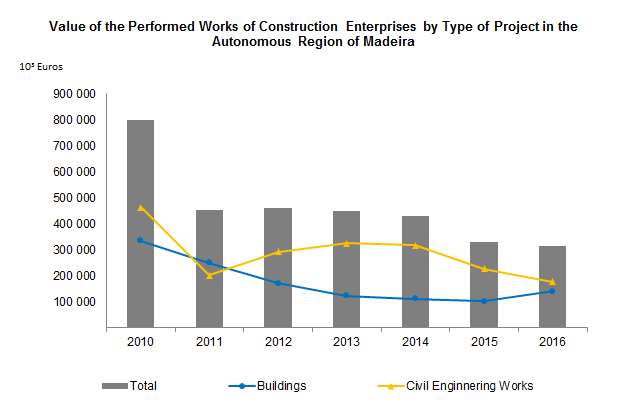