According to the data released by the Bank of Portugal, at the end of the 1st quarter of 2018, the balance of credit granted to non-financial corporations located in the Autonomous Region of Madeira stood at €1.700 billion. The amount of defaulted loans went up by €6 million to a total of €314 million. The default ratio of this type of corporations increased to 18.4%, remaining 5.5 percentage points (p.p.) above national average.

In the household sector, the balance of credit granted at the end of the reference period amounted to €2.916 billion, with the default ratio on bank loans to households decreasing to 4.9% (down by 0.1 p.p. from the previous quarter). In Portugal, the value of this ratio remained stable at 4.2%. The defaulted loans of the households residing in the Autonomous Region of Madeira stood at €144 million, down by €1 million from last December. 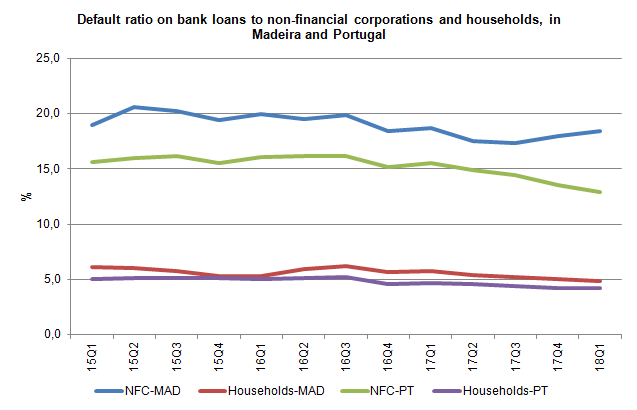 Deposits and deposit like instruments in the local bank establishments reached a total of €4.5 billion at the end of the 1st quarter 2018, down by 34.7% from the previous quarter.