Initial estimates of tourism accommodation for September 2019 show a decrease in the number of overnight stays (-2.6%), total revenue (-3.7%) and revenue from accommodation (-2.8%).

Excluding local lodging under 10 beds, the overnight stays would have declined by 4.1% year-on-year. In the country, on the other hand, overnight stays grew by 3.3%, while total revenue and revenue from accommodation increased by 6.7% and 6.4%, respectively.

In the month of reference, the number of overnight stays in the Autonomous Region of Madeira (considering all local accommodation) stood at 786.9 thousand. Total revenue and revenue from accommodation amounted to 41.3 and 26.9 million euros, respectively.

In cumulative terms (January to September), while overnight stays in tourism accommodation fell by 2.3%, total revenue and lodging revenue recorded a more pronounced decrease (-4.2% and -3.8%, respectively).

The bed occupancy rate in the reference month reached 66.7%, dropping by 4.3 percentage points over the same month of the previous year, while the room occupancy rate reached 74.7%.

The data from the Golf Course Survey show that the number of rounds played in the three golf courses of the Autonomous Region of Madeira in the first nine months of 2019 stood at 46,334 (-0.8% compared to the corresponding period of 2018), generating 1.8 million euros of revenue. 70.2% of those rounds were played by non-members, mainly coming from Nordic countries, Germany and Portugal. 56.6% of the total rounds were sold by hotel establishments and similar, 23.1% by tour operators, and the remaining 20.4% by the golf courses themselves. 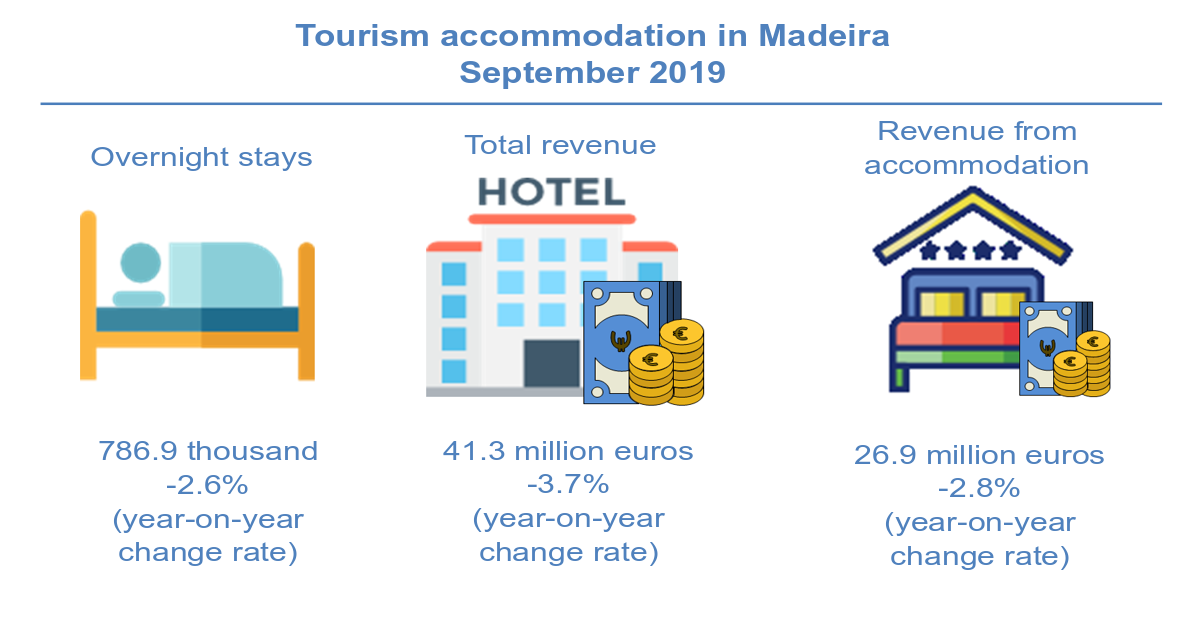 The Regional Directorate of Statistics of Madeira (DREM) released, on its official statistics website, an English version of the new Time Series (1976-2018) for this statistical area. In the new structure, data for hotel establishments, rural tourism and local accommodation units are shown in the same table in line with what has already been published in the monthly publications of 2018 and in annual publication of Tourism Statistics with the final data for the year 2018.