The overall waste production in the Autonomous Region of Madeira fell by only 0.8% compared to the previous year

According to the estimates made by the Regional Directorate of Environment and Climate Change (DRAAC), the overall production of waste in 2020, in the Autonomous Region of Madeira, was around 283.6 thousand tonnes, a value that even in a pandemic context, with strong restrictions on economic activity, was only 2.2 thousand tonnes lower compared to the previous year. This 0.8% decrease is mainly explained by the reduction in the treatment of waste in the Solid Waste Treatment Plant (ETRS) of Meia Serra, which went from 133.5 to 127.2 thousand tonnes between 2019 and 2020, showing a decrease of 4.7%.

A part of the overall waste production is related to the deposit of inert waste, which in the Autonomous Region of Madeira, in 2020, was around 123.9 thousand tonnes, +1.8% than in the previous year, revealing the resilience of the construction sector in a pandemic year, as already mentioned by the Regional Directorate of Statistics of Madeira (DREM) in the 2020 analysis report of this activity. Excluding the deposit of inert waste, the production of solid waste in the Region totalled 159.7 thousand tonnes, i.e., -2.7% than in 2019. 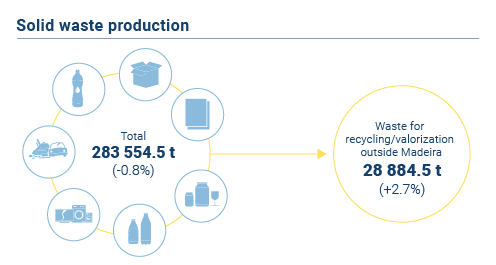