Commercialisation of banana decreased by 24.1% compared to the previous year

According to the data provided by the Regional Directorate of Agriculture (DRA), 16,759.5 tonnes of bananas produced in Madeira were commercialised in 2018 (down by 5,323.0 tonnes from 2017, i.e. -24.1%). The main reason for this decrease was the adverse climatic conditions in the months of February and March, which led to the fall of banana trees and to the destruction of bunches.

August was the month of 2018 in which the largest quantity of marketed bananas (1 693.4 tonnes) was recorded and December the one with the lowest abundance of this product (828.9 tonnes).

January and February were the months with the highest year-on-year increase (+ 38.1% and + 33.0%, respectively). From May to the end of the year, there were always year-on-year drops, especially in September and August, with decreases of 46.6% and 39.9%, respectively. 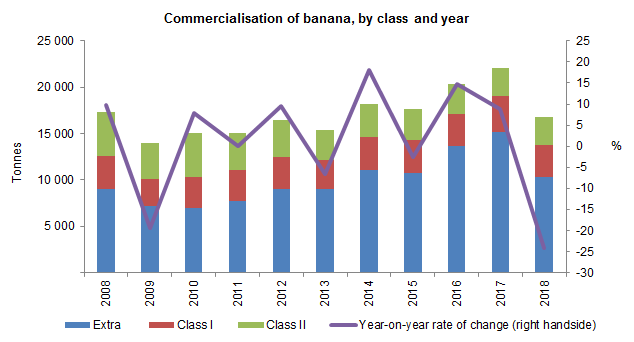