The Regional Directorate of Statistics of Madeira (DREM) releases today statistical information regarding Agriculture and Fishery for the year 2021. In addition to the tables made available on its website, an annual publication is also released, including an analysis report, from which the following highlights are extracted.

In agriculture: Potato and grape production grew, while sugarcane and banana production decreased

- In permanent crops, banana output (21,219 tonnes; -4.8% compared to the previous year) and Vitis vinifera grapes (3,982 tonnes; +2.1% that in 2020) stand out, but with opposite trends. The extra class of banana represented 80.2% of the total processed by GESBA – the regional company that manages the banana industry. In the case of grapes - whose information source is the Institute of Wine, Embroidery and Crafts of Madeira, (IVBAM, I.P.) - it should be noted that 74.3% of production was of Negra Mole variety (78.7% in 2020).

- In aviculture, the egg production, in 2021, reached 23.1 million units, growing 16.4% over the previous year. The production of poultry meat decreased by 6.7%, totalling 3.2 thousand tonnes in the year of reference.

In fishery: Landed catch increased in 2021

- The catches of tuna and tuna-like species went up by 21.7% and the catches of black-scabbard fish down by 12.3%, reaching 2.8 and 1.9 thousand tonnes, respectively.

Regional Economic Accounts of Agriculture (REGEAA) and Exports: Agricultural output decreased by 3.6% in 2020

- The REGEAA data show that the agricultural output in the Autonomous Region of Madeira stood at 96.8 million euros in 2020, decreasing 3.6% in nominal terms when compared with the previous year. 82.8% of the total agricultural output came from crop output and 12.2% from animal output.

- The Autonomous Region of Madeira dispatched 17.1 thousand tonnes of banana in 2021 and 0.6 tons of sweet potatoes. There were also exported in the year of reference 2.6 thousand protea flowers.

Agricultural prices: Indices for agricultural goods and means of production decreased in 2021 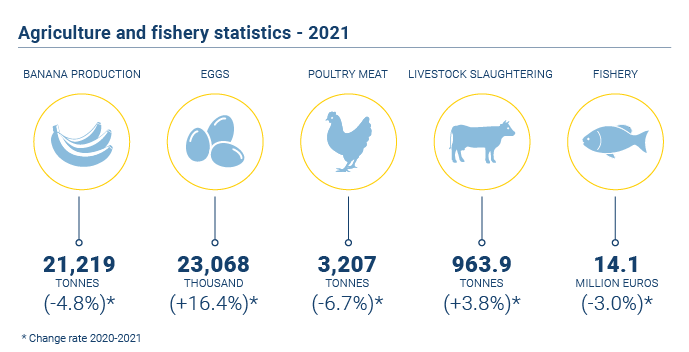 The Regional Directorate of Statistics of Madeira (DREM) releases also today, on its official statistics website, a time series on Agriculture and Fisheries Statistics updated with the data from 2021.

The information for the 1976-2021 period is presented in three different chapters: