The Autonomous Region of Madeira was the second Region among the seven Portuguese NUTS2 regions, behind Área Metropolitana de Lisboa (7.00 €/m2) and ahead of Algarve (5.58€/m2), which ranked third. The national average stood at 4.80€/m2.

Given the minimum number of 30 transactions, information is only available for the municipalities of Funchal, Câmara de Lobos, Santa Cruz and Machico. In the year of reference, Funchal concentrated 733 of the 1,081 lease agreements, followed by Santa Cruz with 167, Câmara de Lobos with 65 and Machico with 34.

Looking at the median house rental value by municipality, Funchal (6.74€/m2) was the only municipality which stood above the value of the Region (5.84€/m2), followed by Santa Cruz (5.17€/m2), Machico (4.19€/m2) and Câmara de Lobos (3.54€/m2). In fact along with the Área Metropolitana de Lisboa and of Porto, the Autonomous Region of Madeira also scored a rent differential between municipalities higher than 3.00 €/m2 .

In a ranking by municipality, Funchal has the 8th highest rental value, behind Lisbon, Oporto and several municipalities of Área Metropolitana de Lisboa. In the 2nd half of 2017, Funchal had been 9th, with the median house rental value increased from 5.85€/m2 in this half to 6.74€/m2 in the reference semester. 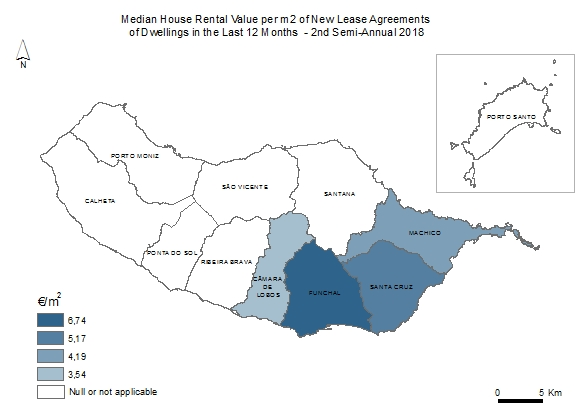