Following the retropolation of the Regional Accounts according to base 2016, made available recently on Statistics Portugal (INE) website, the Regional Directorate of Statistics of Madeira (DREM) releases today the “Time Series of Regional Accounts 1995-2018”. Last December, the first data according to the new base were released but only for the 2016-2018 period. The aforementioned retropolation consists in recalculating the information for the different macroeconomic variables since 1995, according to the premises of base 2016. However, there are not significant differences compared to the data of the previous base (base 2011).

From the analysis of the “Time Series of the Regional Accounts 1995-2018) now released, the following conclusions stand out:

- The year with the largest GDP growth was 2002 (8.3%), while 2012 was the year with the most significant drop (-7.7%). Compared to the other NUTS2 regions (Norte, Centro, Metropolitan Area of Lisbon, Alentejo, Algarve and Autonomous Region of Azores), these the highest changes in both ways (positive and negative).

- Labour productivity, measured by the ratio between the Gross Value Added (GVA) and the employed population, reached a record high in 2018 (34.7 thousand euros), standing however below national average (35.9 thousand euros). Having the country as reference (PT=100), the Region also converged in this indicator, going from 78.1% of the national average in 1995 to 96.6% in 2018. This performance was different from that of the ARA, which in the same period stagnated around 88%.

- The investment rate, the ratio between the Gross Fixed Capital Formation (GFCF) and the GVA, is another indicator in which the ARM stood out, particularly in the 1995-2011 period, in which this metric was higher than national average, reaching the maximum in 2008 (73.8%), with a differential towards the country of over 40 p.p.. From 2012 on, the investment rate dropped sharply to values under 20% and always lower than the national average.

- Regarding the Disparity Index of Gross Disposable Income (GDI) per inhabitant, between 1995 and 2017 (last available year) and compared to the country’s average, the Autonomous Region of Madeira went from a differential of +1.9% (i.e. standing above the national average), to the opposite scenario in 2017, staying below the aforementioned average by 2.2%. In fact, the analysis of the 1995-2017 period, shows two very different subperiods: between 1995 and 2009 this indicator stood always above national average (with the exception of the year 2000) and another, since 2010, with opposite results, with the minimum being recorded in 2015 (6% negative differential compared to the country’s average). 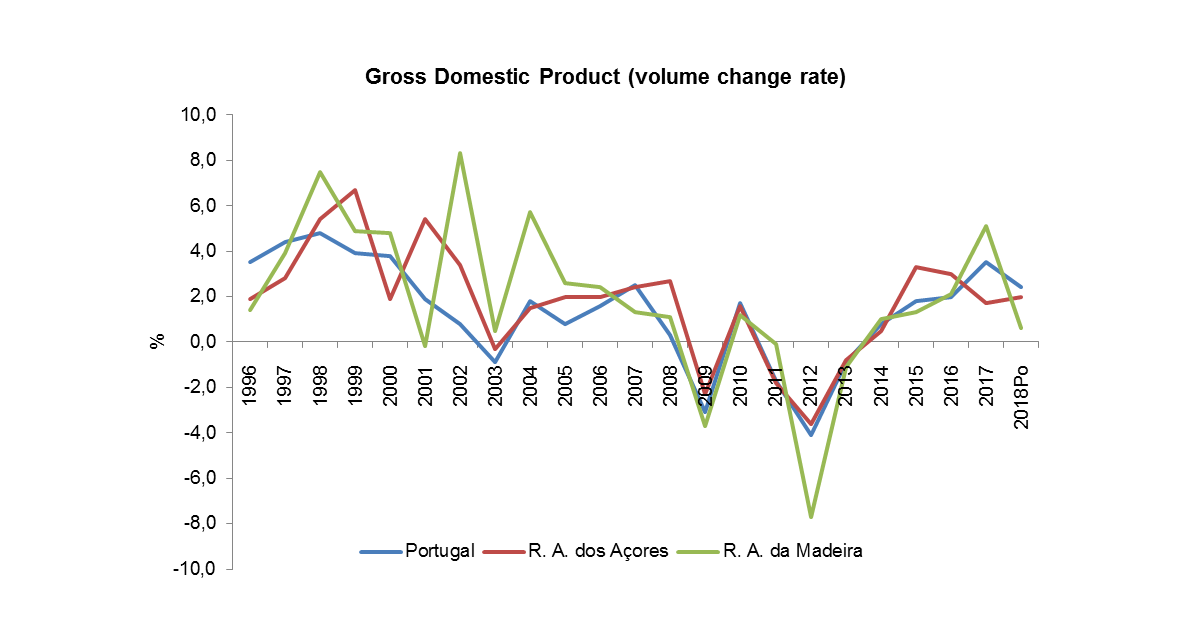