DREM releases Regional Accounts data according to the new Base 2016

The Statistics Portugal (INE) released today the results for the Regional Accounts, for the benchmark year of 2016, thus replacing the previous Base, 2011.

This benchmark revision is a part of the regular revisions that occur every five years, aiming to introduce methodological developments and to incorporate new available information, in order to obtain a more exact portray of economic activity.

For this reason, the values ​​of the 2011 and 2016 bases are not coincident. For example, the value of Regional Gross Domestic Product (GDP) was revised upwards by € 76.9 million, an increase which was largely determined by units registered in the International Business Center of Madeira (IBC).

Note that this release only contains information for the years 2016, 2017 (final) and 2018 (provisional and available only for some variables). Data for previous years (since 1995) will be available during the first half of 2020.

Final data for 2017 show that Madeira’s economy grew by 5.1% compared to the previous year

The final information for 2017 reveals that the Regional Gross Domestic Product (GDP) reached 4 783.6 million euros, rising by 5.1% in real terms (excluding the price effect), compared to the previous year. This significant growth, above the country's average, (+3.5%) is influenced by a substantial increase in the GDP generated by IBC-based companies, although it should be noted that in the rest of the regional economy (excluding the IBC component) growth was also slightly higher than the national average.

In 2017, there is a decisive contribution from Madeira’s main branch of activity: “Wholesale and retail trade; repair of motor vehicles and motorcycles; transportation and storages; accommodation and food service activities”, whose Gross Value Added (GVA) grew by 7.0%. The highest growth in relative terms occurred in “Professional, scientific, technical and similar activities; administrative and support service activities” which recorded a nominal GVA increase of 21.5%.

Gross Fixed Capital Formation (GFCF, the most important parcel of investment) stood at 684.7 million euros in 2017, rising by 21.5%, substantially above the country’s rate of change (+13.8%).

In terms of Gross Disposable Income (GDI) of households in the Autonomous Region of Madeira, it grew by 2.6% in 2017, standing at 12,498 euros per capita, reflecting a disparity index from the national average of 97.8, i.e., it stands 2.2% below that average. The GDI of households registered a 3.2% increase in the country.

Provisional information for 2018 reveals that Madeira’s economy grew by 0.6% compared to 2017

INE in its first estimate for 2018, points to a growth rate in the Region of 0.6% in real terms, a slower pace when compared to the country, in which this indicator reached 2.4%. Note that, in this year, the performance of the Autonomous Region of Madeira is hampered by the IBC-based companies whose GDP declined sharply. The real growth rate of the rest of the regional economy is positive, although standing below national average.

By industry, in 2018, “Construction” (+12.8%) and “Professional, scientific technical and similar activities; administrative and support service activities” (+9.4%), were the branches in which GVA increased the most. In contrast, the most important branch, “Wholesale and retail trade; repair of motor vehicles and motorcycles; transportation and storages; accommodation and food service activities”, despite being the only one of the 10 branches to decline in nominal terms (-1.8%), its size ultimately affects the overall results.

GDP per capita in 2018 amounted to 19,243 euros in the Region, while in the country this ratio stood at 19,827 euros. It should be noted, however, that the only two regions above Autonomous Region of Madeira are also above the national average (A.M. Lisboa and Algarve).

Apparent labour productivity, which corresponds to the ratio between GVA and Employment, was 34,660 euros, below the national value (35,876 ​​euros).

Finally, it should be noted that INE is expected to present the final data for 2018 one year from now, and due to the small size of the Autonomous Region of Madeira’s economy, revisions may be significant. 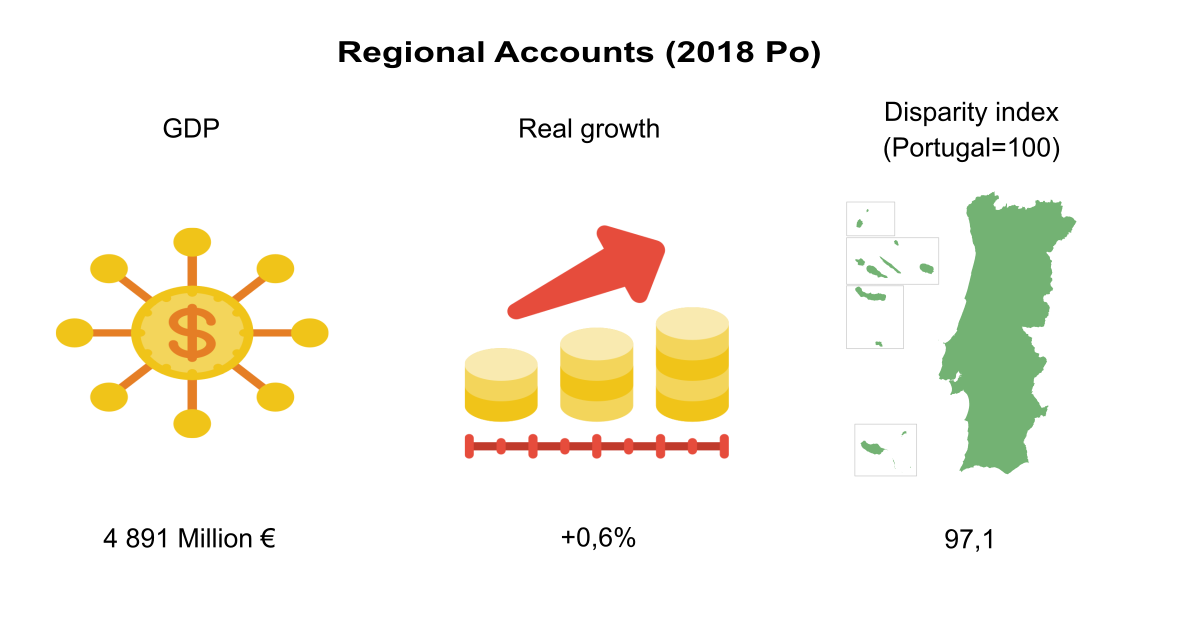