Public Employment in the Regional Administration of Madeira increased

According to the data released by the Directorate-General for Administration and Public Employment (DGAEP) on the latest issue of SIEP (Synthesis of Public Employment Statistics) – released yesterday, May 15th - there were 19,326 persons working in the Regional Government of Madeira (RGM) at 31/03/2019. Compared to the previous quarter, the change was +53 (+0.3%), and the year-on-year increase was 178 (+0.9%). Compared to the end of 2011 there was a decrease of 2,028 persons (-9.5%).

The growth registered in the RGM also occurred on all other institutional sub-sectors of the Public Administration. The Regional Administration of Azores had the highest quarterly increase (+1.7%), while the Local Administration had the most pronounced year-on-year growth (+6.4%). In both cases, GRM recorded a below the average growth when compared to the general government sector. In this sector the rates of growth were 1.0% from the previous quarter and 2.3% year-on-year. 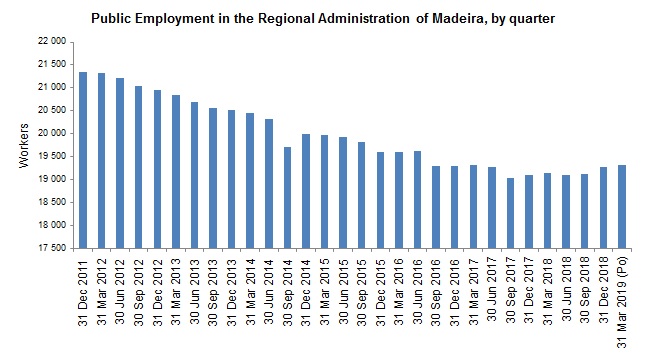