Aggregate of withdrawals and purchases through automatic payment terminals registered a year-on-year increase of 7.2%

Data provided by the Interbank Services Society (SIBS) for the second quarter of 2017 show that the aggregate of withdrawals and purchases through automatic payment terminals (APT) increased by 7.2% compared with the same period of the previous year (below the 8.4% increase registered in Portugal). In the aforementioned period, the purchases through ATP grew by 12.8% while the cash withdrawals rose by 0.8%. In turn, the amount spent on payments had a 10.6% year-on-year (y-o-y) increase.

International cards were used to withdraw 16.8 million Euros (-5.4% y-o-y decrease), while the amount of withdrawals using national cards totaled 152.6 million Euros, up by 1.6% when compared with the corresponding period of 2016. 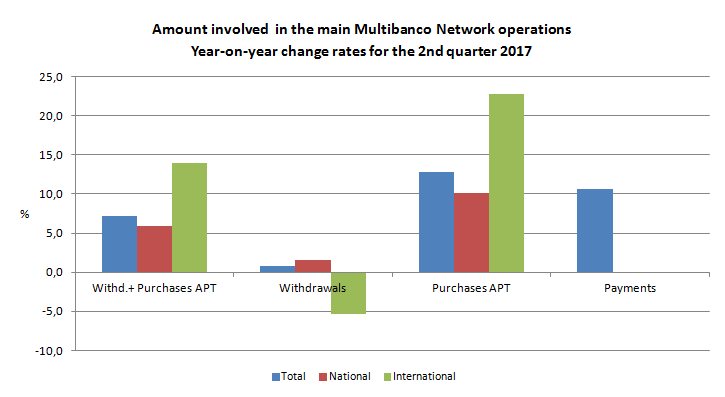 Between January and June 2017, the aggregate of withdrawals and purchases through ATP grew by 6.7% in Madeira and by 7.1% in Portugal, vis-a-vis the same period of 2016.