Aggregate of cash withdrawals and purchases through automatic payment terminals registered a 6.6% increase when compared to 2016

Data provided by the Interbank Services Society (SIBS) for 2017 show that the aggregate of cash withdrawals and purchases through automatic payment terminals (APT) increased by 6.6% compared with the previous year (below the 6.8% increase registered in Portugal). While the cash withdrawals grew by 0.6%, the purchases through ATP rose by 11.7%. In turn, the amount spent on payments had a 7.9% increase. 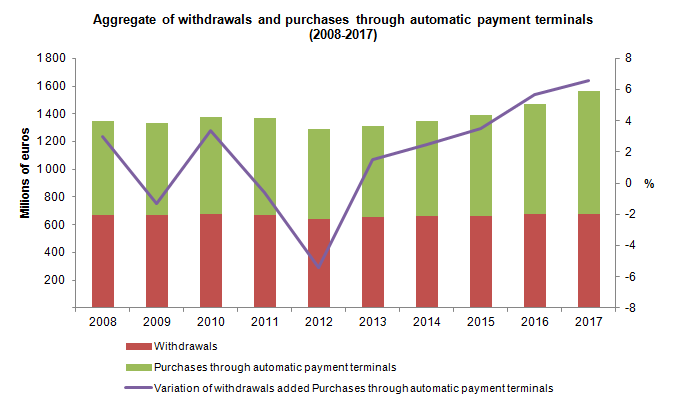 DREM updates the time series on the Multibanco network operations

Since the year 2017 has come to an end, DREM updated the time series on the Multibanco network operations, the first year of data being, in most cases, 1997. Data on operations, withdrawals, consultations, payments, purchases through APT, number of terminals and ATM machines are now available.