The Regional Directorate of Statistics of Madeira publishes today data provided by the Interbank Services Company (SIBS) for the Autonomous Region of Madeira and for 2021. The information for this year is based in new criteria, which differ from the information concerning the 1997-2020 period.

Due to changes adopted by SIBS, the concepts of Automatic Teller Machine (ATM) and Automatic Payment Terminals (POS) had to be adjusted, and the information now released includes transactions carried out on all terminals of the SIBS network and not only on the Multibanco network. It also includes transactions carried out through digital/online channels.

Given the above, DREM created a break in the time series in 2021. As such, any comparison with the year 2020 and the years before should not be performed.

In 2021, the value of withdrawals added to purchases through automatic payment terminals of the SIBS network in the Region reached 1,937.5 million euros

In turn, purchases through automatic payment terminals (POS) were around 1,253.1 million euros, of which 1,001.7 million were with national cards and 251.3 million with international cards. 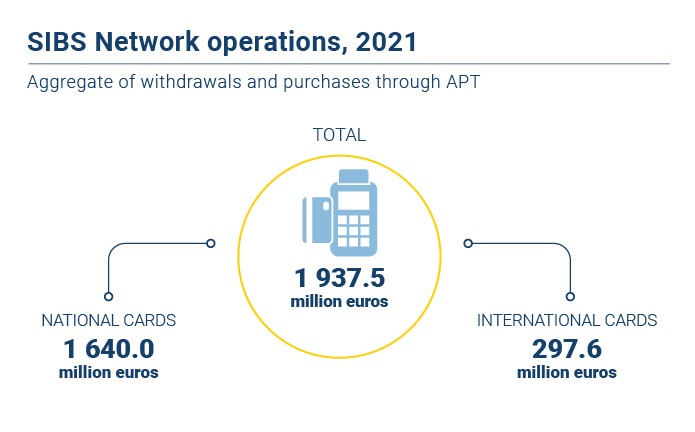 Data by municipality shows that in Funchal, withdrawals and purchases in aggregate stood at 1,177,4 million euros, which corresponds to 60.8% of the total of the Region. On the other hand, Porto Moniz was the municipality with the lowest value in this indicator, standing at 11.1 million euros.

The information currently available allows a more detailed analysis regarding the transaction amounts on the SIBS network. Given the Christmas celebrations in December, it is relevant to look at all the period between the 1st week of November and the end of the year.

DREM updates the time series on the SIBS network operations

Since the year 2021 has come to an end, DREM updated the time series on the SIBS network operations, the first year of data being, in most cases, 1997. Data on operations, withdrawals, consultations, payments, purchases through APT, number of terminals and ATMs are now available. However, as mentioned above, the information for 2021 is not comparable with previous years.