Initial estimates of tourism accommodation for June 2019 show a decrease in the number of overnight stays (-2.3%) and in total revenue (-3.3%), which is explained by the negative performance of the two main traditional markets.

Excluding local lodging under 10 beds, the overnight stays would have declined by 3.4% year-on-year. In the country, on the other hand, overnight stays grew by 5.6%, while total revenue and revenue from accommodation increased by 11.8% and 12.1%, respectively.

In the month of reference, the number of overnight stays in the Autonomous Region of Madeira (considering all local accommodation) stood at 766.2 thousand. Total revenue and revenue from accommodation amounted to 39.1 and 25.1 million euros, respectively.

Looking at the data broken down by market, compared to June 2018, the British, German and French markets had a negative performance, declining by 8.9%, 8.8% and 5.5%, respectively. The Portuguese market grew by 8.3%.

Considering the January to June period, overnight stays decreased by 2.6% year-on-year, while total revenue and lodging revenue fell by 4.9% and 4.0%, respectively.

The bed occupancy rate in the reference month reached 66.1%, dropping by 3.8 percentage points over the same month of the previous year, the highest among Portuguese NUTS II regions. In turn, the room occupancy rate reached 72.2%.

The data from the Golf Course Survey show that the number of rounds played in the three golf courses of the Autonomous Region of Madeira in the first six months of 2019 stood at 37,324 (a 1.7% growth compared to the corresponding period of 2018), generating 1.5 million euros of revenue. 73.3% of those rounds were played by non-members, mainly coming from Nordic countries, Germany and UK. 61.1% of the total rounds were sold by hotel establishments and similar, 22.3% by tour operators, and the remaining 16.5% by the golf courses themselves.

According to the data provided by the Port’s authority, 314,123 transit passengers aboard cruise ships were counted  in the January to June 2019 period, a 15.4% increase when compared to the same period of the previous year. The number of cruise ships that visited the Autonomous Region of Madeira went up by four compared to the first half of 2018. 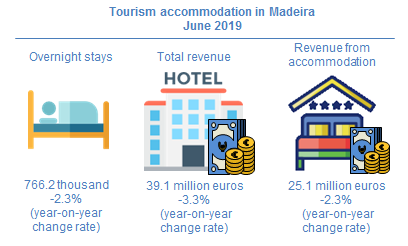