In 2021, a new Labour Force Survey data series becomes available, which includes, among other changes, the removal of persons engaged in agriculture and fishing activities exclusively for self-consumption from the employed population and the restriction of the active population to those aged 16 to 89. For this reason, with reference to this data series and according to the new criteria, the data of the previous quarters were revised, since direct comparison between the estimates from different data series must be avoided. For more information, check the note in Statistics Portugal website.

The Labour Force Survey results for the first quarter of 2021 indicate that the unemployment rate for the Autonomous Region of Madeira (ARM) was estimated at 9.6%. This value decreased by 1.7 percentage points (p.p.) when compared with the previous quarter and increased by 3.6 p.p. from the same quarter of last year.

The estimate of the unemployed population in the A.R. Madeira stood at 12.3 thousand persons, having recorded a year-on-year increase of 61.4% and a quarterly decrease of 16.5%.

The employed population was estimated at 116.4 thousand persons, representing a year-on-year drop of 3.9% and quarterly increase of 0.2%.

The inactive population stood at 124.5 thousand persons in the reference quarter, decreasing by 0.5% year-on-year. Compared to the previous quarter, there was a 1.3% increase.

The reduction in the unemployment rate over the previous quarter may be related to the flow between the inactive and unemployed population, because the latter, in the 1st quarter of 2021, due to the adverse economic situation, may not have actively searched for a job, thus falling in the status of inactive. 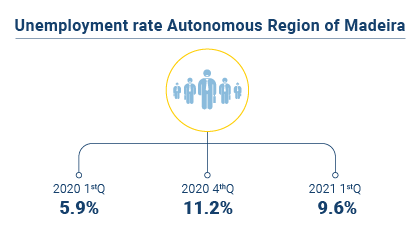