The Directorate of Statistics of Madeira (DREM) presents the quarterly and annual data of Transacted Dwellings series, revised and extended with new indicators after the Portuguese Tax and Customs Authority (AT) made available more detailed and additional information to Statistics Portugal (INE).

This additional information makes available new indicators for the Autonomous Region of Madeira (ARM): the number and value of dwelling transactions, broken down by the buyer's institutional sector (households and other sectors), on a quarterly basis (as of the 1st quarter of 2019) and the buyer's tax residence (National Territory, European Union, and Remaining Countries), on an annual basis (as of 2019).

It should also be noted that this additional information provided to INE by the AT has led to the suppression of redundant records of Property Transfer Tax (IMT) assessments and consequently in the downward revision of the number and total value of dwelling transactions.

It should also be recalled that this information is obtained from the administrative tax data on the IMT and the Municipal Property Tax (IMI), which are provided monthly to INE by AT, on the basis of a cooperation protocol signed between these two entities.

Analysis of the results

In 2021, 3,571 dwellings were sold in the Autonomous Region of Madeira, which represents an increase of 32.0% over the previous year. It should be noted that this figure is the highest in the available time series, which began in 2009. 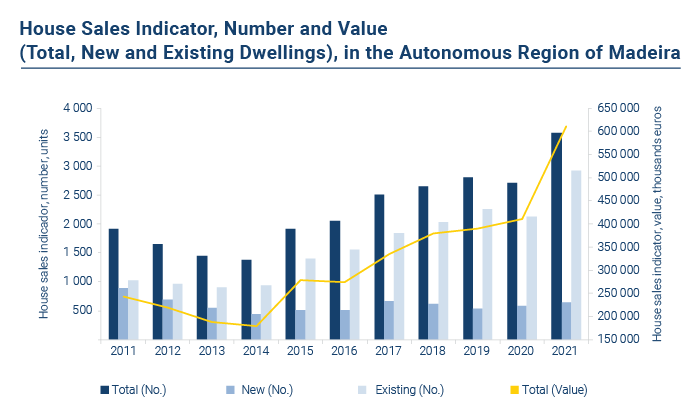 In 2021, dwelling transactions, whose buyers belonged to the institutional sector of households, accounted for 84.3% in number and value of the total transactions recorded in the Autonomous Region of Madeira, slightly lower than that observed in 2020 (88.4% and 89.2%, in the same order). This year, 3,012 transactions with an equivalent value of 515.6 million euros were registered in this sector, which represents, an increase of 41.0% and 25.9%, respectively compared to 2020. At a national level, the purchase of dwellings by families accounted for 85.6% (number) and 85.7% (value) of the national total this year.

In the quarter under review, Madeiran households acquired 850 dwellings, up by +10.1% and +20.2% over the previous quarter and over the same quarter, respectively. In terms of value, transactions of this nature amounted to 158.5 million euros, rising by 50.2% compared to the 4th quarter of 2020.