142.8 thousand overnight stays were reported by tourist accommodation establishments in Madeira, -73.9% compared to the same period in the previous year

In the main markets, after a period with some recovery in the number of overnight stays, the estimated changes in overnight stays in the month of November 2020, again had a quite significant fall, above 70%. The French market recorded the sharpest drop with -87.5% of overnight stays, followed by the British with -73.6% and the German with -71.0%. The national market also registered a very significant drop (-47.0%) compared to previous months, although below 50%.

Considering the January to November period, overnight stays decreased by 66.1% year-on-year, while total revenue and lodging revenue declined by 68.2% and 68.3%, respectively.

The bed occupancy rate in the reference month reached 16.9%, dropping by 31.9 percentage points over the same month of the previous year. In turn, the room occupancy rate reached 19.5%. 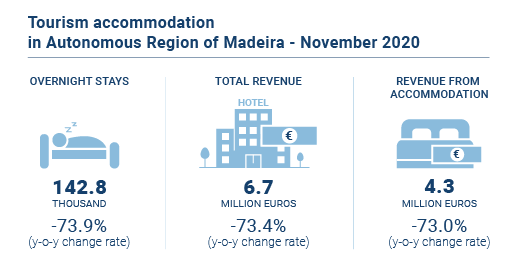