The Regional Directorate of Statistics of Madeira (DREM) releases today on its website, the Time Series on Social Protection, updated with information for 2017. The majority of the tables begins at year 2004.

The summary of the main results, available below, has two parts, one about Social Security and the other concerning the Civil Service Retirement System Scheme.

At the end of 2017, there were 68.0 thousand Social Security pensioners in the Autonomous Region of Madeira, corresponding to just over a quarter of the resident population. From that total, 61.0% received old age pensions, 27.1% survival pensions and 11.9% disability pensions. Compared to 2016, the number of pensioners increased by 0.8%, as a result of the positive change in the number of old age and disability pensioners (+1.5% and +1.0% respectively). The number of recipients survival pensions decreased by 0.9%.

The average duration of the unemployment benefit was 187 days, down by 18 days from 2016. The average value of this type of benefit was 2 743 euros, a 9.7% decrease over the previous year.

6.1 thousand persons (of which 49.0% males), benefited from social integration income. 39.9% of the recipients were under 25 years.

The recipients of sickness benefits rose by 4.6% between 2016 and 2017, reaching a total of 10.3 thousand in this year. The mean number of days subsidised stood at 76 days, down by four from the previous year. The total paid values amounted to 13.2 million euros, an increase of 8.1% compared to 2016. 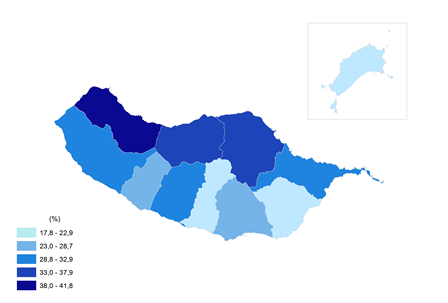 At the end of 2017, the number of pensioners of the Civil Service Retirement System Scheme stood at 12.5 thousand (70.5% of which were recipients of disability and old age pensions), the same value as in 2016.