Implicit interest rate on housing credit in the Autonomous Region of Madeira decreased compared to the previous month, while the average loan repayments remained unchanged

The average value of loan repayments for all housing credit contracts remained at 267 euros in the month of reference, with the interest set at 37 euros and the capital amortisation at 230 euros (the same values as in the last month). In March 2021, a month in which the moratorium on the responsibilities of households with mortgage loans was in place, the average value of loan repayments was just 231 euros.

In Portugal, and in all housing credit contracts, the implicit interest rate fell to 0.791%, down by 0.002 pp over the previous month. The average value of loan repayments remained unchanged at 255 euros. The average outstanding loan value grew from 58,749 euros, in February 2022, to 59,067euros, in March 2022. 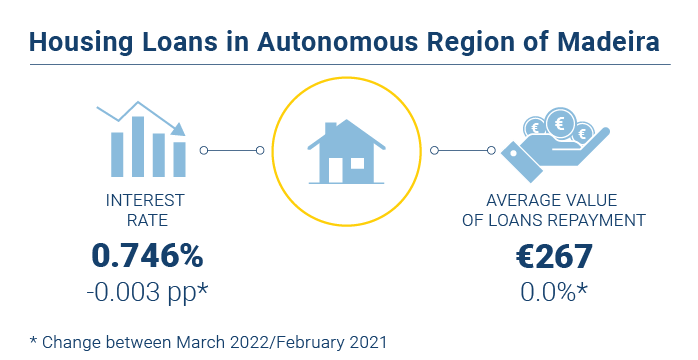