The Regional Directorate of Statistics of Madeira (DREM) releases, for the first time, in its website, data on Regional Economic Accounts for Agriculture (REGEAA). These accounts are produced by Statistics Portugal (INE) for all the NUTS2 Portuguese regions and are partially based on data collected by DREM from farmers and from other sources like the Regional Directorate for Agriculture and Rural Development, the government department that oversees this activity.

These are the first accounts in base 2011 (which replaced base 2006) which are consistent with base 2011 of the Portuguese Regional Accounts, released on December 18th, 2014. Specific methodological changes resulting from the adoption of the European System of Accounts (ESA 2010) were introduced. The change in the base of the REGEAA determined important revisions of some results, reflecting specific methodological changes, although, in the case of the Autonomous Region of Madeira, the major impact came from the inclusion of new sources of information (Agricultural Census 2009 and the Floriculture and Ornamental Plants Survey).

The Gross Value Added (GVA) corresponds to the difference between production (at basic prices) and intermediate consumption. Between 1995 and 2013, GVA rose from 48.6 to 73.4 million euros. In nominal terms, the agricultural GVA grew by 11.3% between 2012 and 2013. 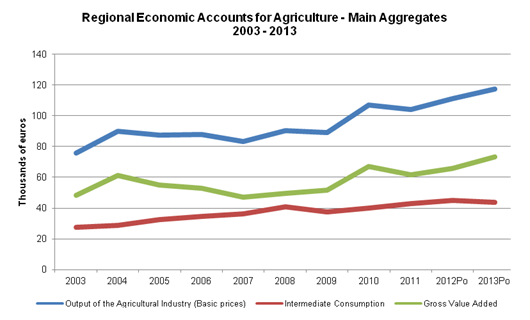