Enterprises headquartered in the Autonomous Region of Madeira intend to recruit 3,189 workers

For the first time, in collaboration with 2 government agencies related with education and qualification (ANQEP and DGEEC), Statistics Portugal promoted a Survey on the Identification of Qualifications Needs in Enterprises (IINQE), which was conducted in the Autonomous Region of Madeira (ARM) by the Regional Directorate of Statistics of Madeira (DREM). The period of electronic response to this survey started, as planned on March 13th, a week before the declaration of the state of emergency, and lasted until the end of June. Although the response rate was relatively high (83.0% in the Autonomous Region of Madeira, 73.2% in Portugal), the results obtained should partially reflect the exceptional moment that economic activity has faced.

According to the results of the IINQE, in the next years (2021-2022) the enterprises headquartered in the ARM intend to recruit 3,189 workers, 0.9% of the total number of workers which the Portuguese enterprises want to recruit.

Enterprises located in Mainland Portugal intend to recruit 2,053 workers for their establishments (local units) in the ARM.

About 78.3% of the workers to be recruited by the enterprises headquartered in the ARM should have a non-higher education course (professional), 13.7% a higher education course and for 8.0% no specific qualification level is indicated. In the country, these proportions were, by the same order, 49.9%, 32.2% and 17.9%. 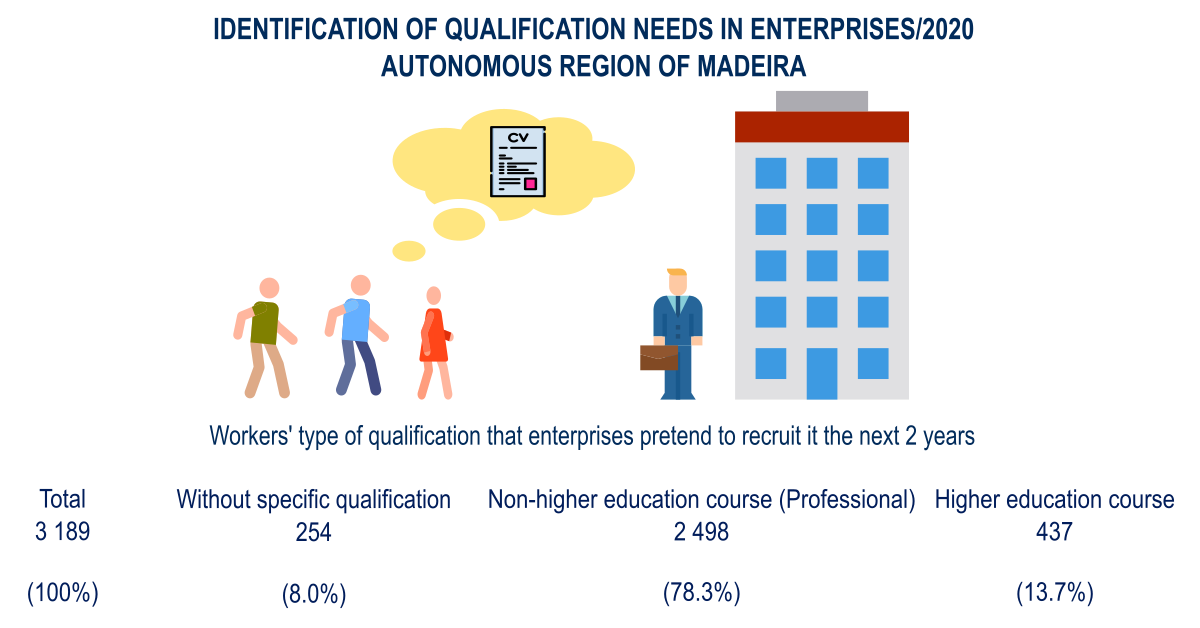 Despite the context of the pandemic, the non-higher qualifications most indicated by the enterprises were “Restaurant/bar employee”, “Trade technician”, “Reception technician” and “Cook”.

Otherwise, the most mentioned higher education courses were related to trade: “Sales and commercial management” and “Sales and fashion business management”.

In 2020, 59.8% of the enterprises reported that their main motivation to recruit workers is business expansion while 33.6% mentioned workforce replacement.

82.6% of the enterprises registered in the ARM declared to find no recruitment difficulties.