Number of banks decreased, as well as interests and commissions received.

Due to statistical confidentiality, the number of persons employed in banks and the personnel expenses for 2020 cannot be disclosed for three municipalities and for the Autonomous Region of Madeira. However, the information available for the remaining eight municipalities shows that there was a decline in the number of employees in Calheta (-3), Santa Cruz (-2), Machico and Ribeira Brava (-1), while the remaining municipalities remained unchanged. Personnel costs did not change uniformly in the municipalities for which information is available, with the changes ranging from +6.4% in Machico and -6.0% in Calheta.

Interests and similar income were around 44.5 million euros in 2020, down by 9.4% over 2019, while the commissions received by the banks located in Madeira fell to 26.9 million euros, -3.2% from the preceding year.

In 2020, the deposit interests reached the lowest level in the available time series (which began in 1997), standing at 4.4 million euros, half of that recorded in 2019.

In the insurance sector, there were 13 establishments in the Autonomous Region of Madeira, one more than in 2019. The persons employed reached a new low (since 1998, the first year for which data is available for this activity) of 40, down by three persons from 2019. In contrast, personnel expenses increased by 0.5% between 2019 and 2020. The gross premiums issued by the insurance establishments in the Region fell to 47.6 million euros, a decrease of 11.7% over the previous year. 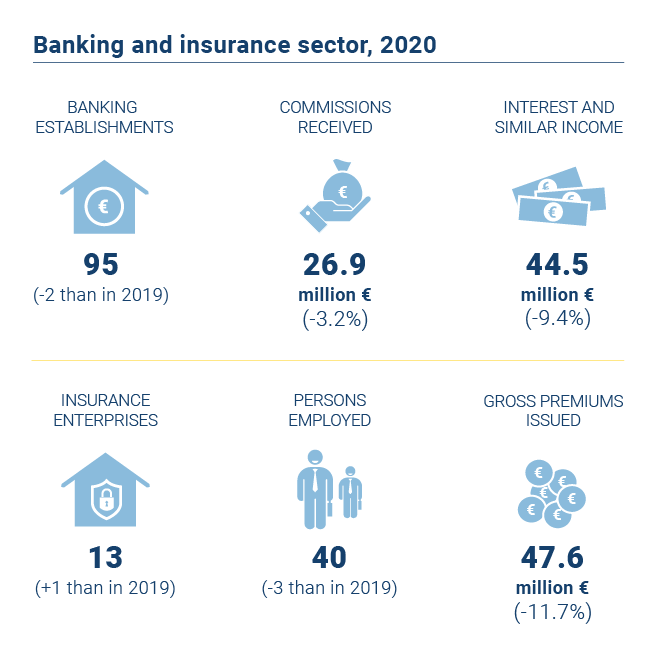