According to the data released by the Bank of Portugal, at the end of the 4th quarter of 2018, the balance of credit granted to non-financial corporations located in the Autonomous Region of Madeira stood at €1.682 billion. The amount of defaulted loans went down by €52 million to a total of €248 million. The default ratio of this type of corporations decreased to 14.8%, remaining 5.4 percentage points (p.p.) above national average.

In the household sector, the balance of credit granted at the end of the reference period amounted to €2.890 billion, with the default ratio on bank loans to households decreasing to 3.6% (down by 0.8 p.p. from the previous quarter). In Portugal, the value of this ratio was 3.4%. The defaulted loans of the households residing in the Autonomous Region of Madeira stood at €104 million, down by €24 million from last September.

It should be noted that the improvement in overdue credit indicators is largely explained  by sales of credit portfolios in December, related to non-financial corporations and households. This led to a decrease in the amount of defaulted loans and also in the national and regional ratios of overdue loans. 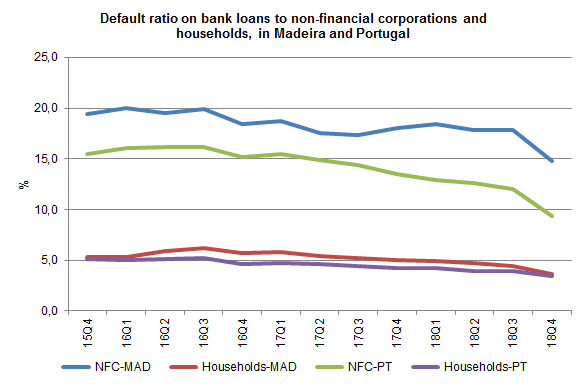 Deposits and deposit like instruments in the local bank establishments reached a total of €4.6 billion at the end of the 4th quarter 2018, up by 0.8% from the previous quarter.