Only 10.4% of the establishments of the tourist accommodation sector had a guest flow

The first estimates for the month of June 2020 regarding tourist accommodation in the Autonomous Region of Madeira show the resumption of tourist activity but still with about 89.6% of the establishments closed or with no guest flow. The percentage of establishments with guest flow stood at 18.8% in rural tourism, 13.2% in hotels and 9.9% in local accommodation.

In the month of reference, the number of overnight stays in the Autonomous Region of Madeira (considering all local accommodation) stood at 21.0 thousand. Total revenue and revenue from accommodation amounted to 597 and 460 thousand euros, respectively.

Compared to June 2019, all the main markets had a negative performance near -100%, with the British and the French markets sinking by 99.7% and the German market decreasing by 99.4%. The Portuguese market dropped by 85.6%. In cumulative terms (January to June 2020), the French market recorded the largest decline with a 79.0% drop in overnight stays, followed by the German and Portuguese markets, with decreases of 62.7% and 58.2%, respectively. The British market recorded, for the same period, a 55.1% drop.

Considering the January to June period, overnight stays went down by 61.8% year-on-year, while total revenue and lodging revenue declined by 64.2% and 64.3%, respectively.

The bed occupancy rate in the reference month reached 13.6%, dropping by 52.3 percentage points over the same month of the previous year. In turn, the room occupancy rate reached 14.9%.

In a pandemic context, the average incomes per room (RevPAR) values continue to be significantly low, recording a year-on-year change rate of -83.4% and decreasing to € 8.13. The average daily rate (ADR) declined by 19.1% to €54.40.

The data from the Golf Course Survey show that the number of rounds played in the three golf courses of the Autonomous Region of Madeira in the first six months of 2020 stood at 21,878 (-41.4% compared to the corresponding period of 2019). 72.2% of those rounds were played by non-members, mainly coming from Nordic countries, Germany and the UK. 61.5% of the total rounds were sold by hotel establishments and the similar, 22.4% by tour operators, and the remaining 16.1% by the golf courses themselves.

The effects of the pandemic were also reflected in this segment, being important to note that between March 17 and April 31 the three golf courses were closed, with the reopening only taking place in May 2020.

According to data provided by the Port’s authority, there were no cruise ships docked in the 2nd quarter of this year, due to the coronavirus pandemic. Consequently, in the first half of 2020, the year-on-year drop in transit passengers was 31.3%. The number ships visiting Madeira decreased by 26.1%, corresponding to 83 fewer ships than in the same period of 2019. 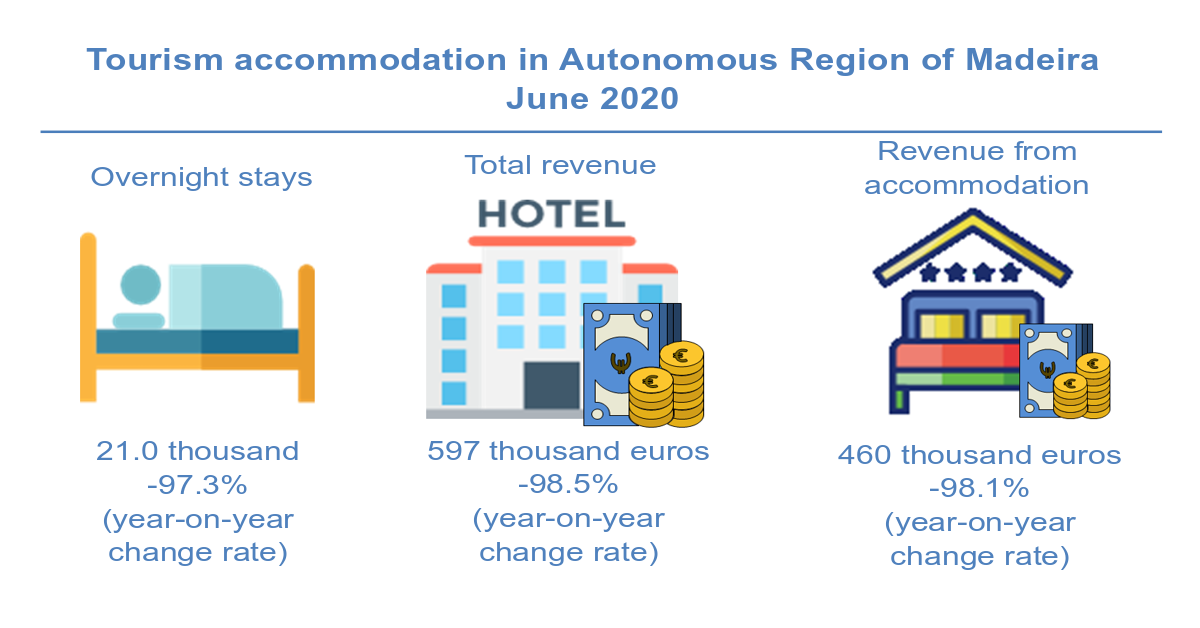