The Regional Directorate of Statistics (DREM) releases today on its website the update of the Time Series on Lists of Personnel with data for 2015.

It should be noted that this time series begins at 1995.

These data comes from the statistical compilation of information provided by the Annex A of the Single Report which contains data about the social activity of the enterprise. In the scope of this statistical operation, in 2015, 41.8 thousand  employees  (full time and full paid) were counted in the establishments located in the Autonomous Region of Madeira. Compared with 2014, there was a 1.2% increase.

The level of education is an important factor of differentiation among employees. The employees with a lower level of education (below basic education) have a lower mean monthly earning (€787.65). Between those with the 4th (€875.65) and 9th grade (€890.81), the gap is not pronounced but it widens for those with secondary education (€1,049.58). Holding a graduate degree allows a significant increase in the mean monthly earning (€1,815,22). The employees with a PhD have the highest earning (€2.061,48). 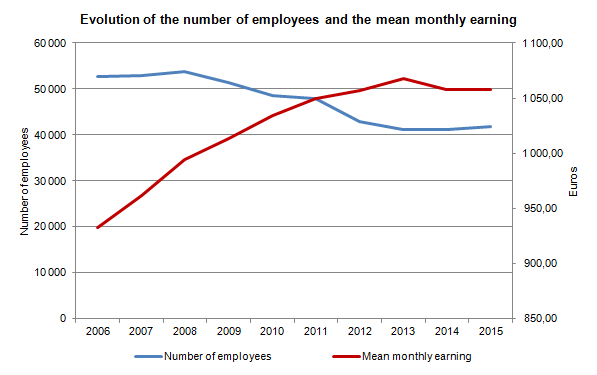