The Regional Directorate of Statistics of Madeira (DREM) makes available today, in its official statistics website, the Preliminary Results of the XVI General Population Census and VI General Housing Census (2021 Census) for the Autonomous Region of Madeira.

The population reduction was shared by all municipalities, being less significant in Santa Cruz (-1.7%) and more pronounced in Santana (-15.0%). Of the 54 civil parishes in the Autonomous Region of Madeira, only 7 registered increases, being Água de Pena (+12.9%) the most noteworthy.

Despite the population drop, the number of households increased by 2.2% and, in the municipalities, only Santana and S. Vicente showed a reduction in this variable. This result suggests a continued decrease in the number of persons per household. 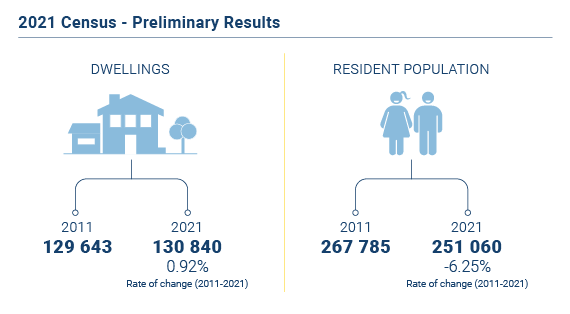 In Portugal, there was also a population decrease, although less significant, of 2.0%. Of the 7 NUTS II regions, only Algarve (+3.7%) and the Metropolitan Area of Lisbon (+1.7%) recorded increases in the resident population. The largest decline was observed in Alentejo (-6.9%) and the smallest in Norte (-2.7%). In Centro and in the Autonomous Region of the Azores the rates of decrease were close, 4.3% and 4.1%, respectively.