In the first three months of 2018 the egg production stood at 4.0 million units, decreasing by 37.4% year-on-year.

Between January and March 2018, the weight of the slaughtered livestock grew by 9.0% year-on-year, reaching 179.8 tonnes.

Compared to the same period of last year, the data on landed catch showed a 24.5% drop in volume in the first three months of 2018 and a 8.5% decrease in first sale receipts.

This decrease was mainly driven by the decline in the catch of black scabbardfish (-31.7% in volume and -19.6% in first sale receipts). Despite the decrease in landed catch of black scabbardfish, this specie was the most abundant in the first three months of 2018. The catch of tuna and tuna-like species increased by 33.2% year-on year, while the first sale receipts generated by this species grew by 20.9%. 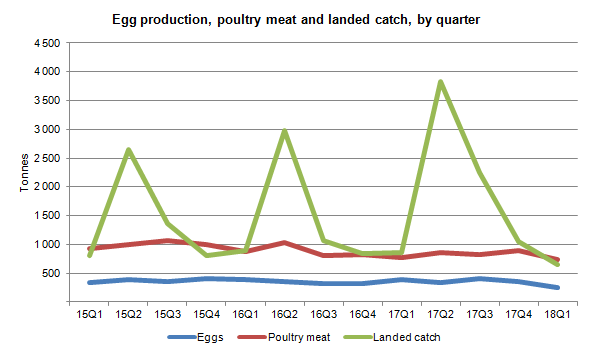