Agricultural output in the Autonomous Region of Madeira rose by 2.2%

The Regional Directorate of Statistics of Madeira releases today the provisional data for 2017 concerning the Regional Economic Accounts for Agriculture (REGEAA), recently made available by Statistics Portugal, allowing the update of the time series available on our website which begins in 1995.

The REGEAA data show that agricultural output in the Autonomous Region of Madeira stood at 112.0 million euros in 2017, growing by 2.2% from 2016 in nominal terms.

The Gross Value Added (GVA) corresponds to the difference between production (at basic prices) and intermediate consumption. In 2017, the GVA reached 70.4 million euros, increasing by 2.5% between 2016 and 2017.

It should also be noted that the economic values of 2017 for agricultural production and GVA were the highest since the REGEAA began (1995). 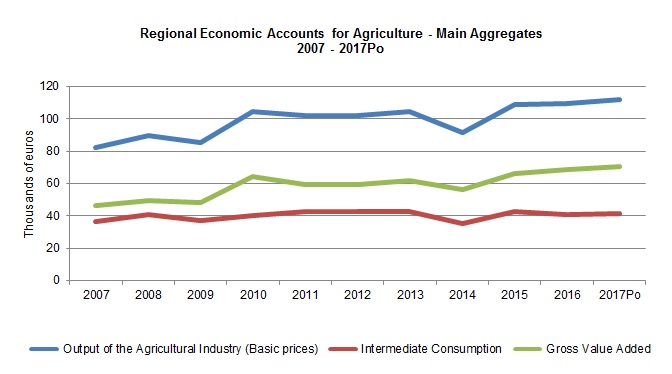