At the end of the second quarter of 2022

Gross debt of the Regional Public Administration of Madeira stood at 4 968.7 million euros

The decrease in the Regional Public Administration of Madeira debt seen in this quarter is explained by the payment of loans which, for this purpose, used both the bond issue that occurred in March 2022, as well as the Region's own revenues.

The breakdown of the gross debt by financial instrument shows a decrease in the share of loans from 51.2% in the second quarter of 2021 to 46.2% in the reference quarter. This decline was offset by the growth in the percentage of securities which, during the same period, rose from 48.8% to 53.2%.

By issuer, the Regional Government is responsible for 91.6% (90.7% in the same quarter of the previous year) of the gross debt and the Public Enterprises classified in the government sector for 8.4% (9.3% in the second quarter of 2021). 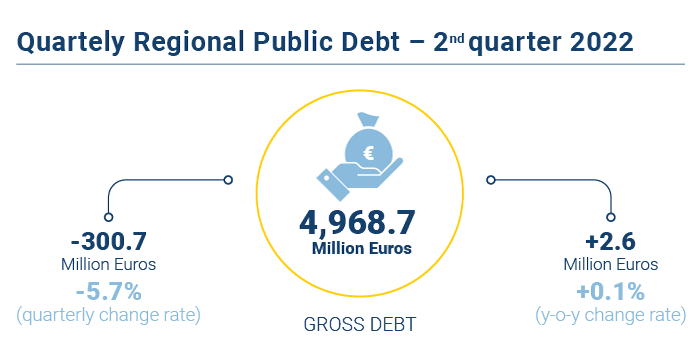 The public debt, in the Maastricht definition, corresponds to the definition of the Excessive Deficit Procedure (Regulation (CE) 479/2009, of 25 May), i.e., the general government consolidated gross debt at nominal value (Maastricht debt). This concept diverges from the total stock of liabilities defined in the ESA, both in terms of the instruments accounted for and in terms of the valuation criteria. This concept of debt adopts the nominal value as the valuation rule, i.e. the value which the public administration (issuer/debtor) must repay at the end of the contract. The limit established in the Protocol annexed to the Treaty on the Functioning of the European Union is 60% of GDP.