The Regional Directorate of Statistics of Madeira (DREM) releases today, a time series on Tax Revenue Statistics for the 2006-2020 period. The data for 2019 and 2020 are provisory and preliminary, respectively.

This series was produced by Statistics Portugal (INE) during the compilation of the national Tax Revenue Statistics and it is consistent with the base year 2016 of the Portuguese National Accounts. The terminology adopted assumes the conceptual framework of the European System of National and Regional Accounts (ESA2010).

Most of the information was provided by the Regional Directorate for Budget and Treasury to DREM in the scope of the Quarterly and Annual Public Administration Statistics (and also of the Excessive Deficit Procedure), complemented with other data gathered by Statistics Portugal from the Central Government.

These data refer to taxes that constitute revenue of the Regional Administration of Madeira. These values are presented on an accrual basis and consequently differ from the data released in the Annual Account of the Autonomous Region of Madeira.

However, it must be stressed that this information does not allow the determination of the “tax burden”. There are taxes and social contributions which are a revenue of other Government Sectors, namely of the Local and Central Administrations. Besides, the Value Added Tax (VAT) that constitutes a revenue of the Regional Administration of Madeira derives from the application of a formula (order 77-A/2014 of March 31st) and not from the effective collection of the VAT.

According to the preliminary data of 2020, the tax revenue of the Region, on an accrual basis, amounted to 851.7 million euros, down by 10.7% from the preceding year. 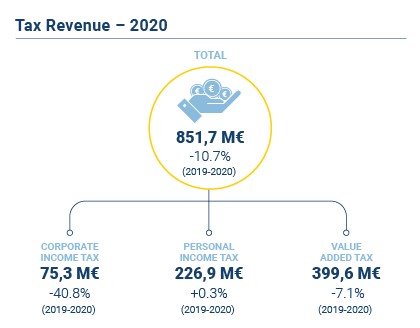 The individual income tax (IRS) stood at 226.9 million euros, increasing by 0.3% from 2019. This tax represents 74.8% of the total direct taxes revenue of the Regional Administration of Madeira (RAM).  The resilience of this tax is related to measures which were implemented by the Government to protect labour and the growth of pensions, leading to a slight increase of the IRS over 2019.

In 2020, the corporate income tax (IRC) was 78.3 million euros, a 40.8% decrease from 2019. IRC has had an irregular behavior throughout the whole period of the time series, but in 2020 it was affected by the limitation of payments on account implemented by the Portuguese Government.

The Value Added Tax (VAT) was the tax that generated more revenue to the Autonomous Region of Madeira - 399.6 million euros - down by 7.1% from 2019, and representing 72.9% of the indirect tax revenue of 2020. The drop in this tax can be explained by its calculation, which depends on the national revenue of the VAT, that dropped rather significantly in 2020.