According to the Immigration and Borders Service (SEF), on December 31st, 2021, the foreign population with resident status in the Autonomous Region of Madeira reached 10,405 persons – the highest value since 2008 (first year of the time series) – representing an increase of 10.0% from 2020 (+950 persons). The overall foreign population is the total of residence permits since there was no registration of long-stay visas.

The Venezuelan (22.6%), the British (11.7%), the Brazilian (9.5%), and the German (8.5%) nationalities remain the largest foreign communities residing in the Autonomous Region of Madeira. 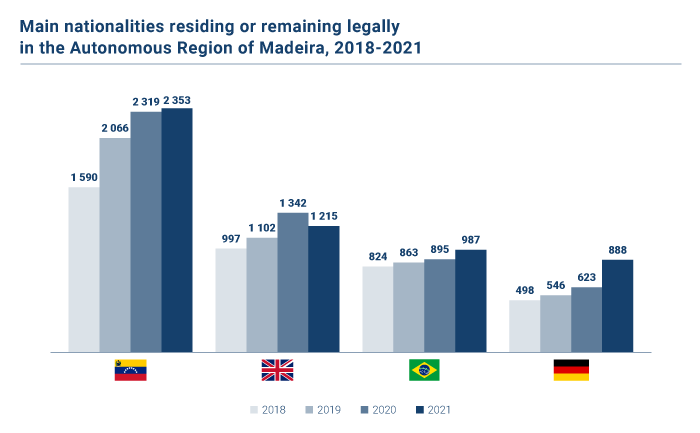 The foreigners residing in the Region with German nationality contributed the most to the growth of the foreign population between 2020 and 2021 (+950 persons), representing 27.9% of the overall increase. The following largest contributions were due to nationals from Brazil and Poland, representing +9.7% and +8.2%, respectively.