The overwhelming majority of women, aged 18 to 49, living in the Autonomous Region of Madeira consider that government incentives are needed so that people can have more children

The Regional Directorate of Statistics of Madeira (DREM) releases today more detailed results of the Fertility Survey (IFEC), carried out in 2019, for the Autonomous Region of Madeira (RAM). It should be noted that on December 3rd, DREM made a first release of this survey’s data.

The results released today focus on an analysis of women's fertility, according to different socioeconomic profiles. Also, this publication gives an insight on women’s motivations for motherhood and their opinions regarding several measures that could potentially increase the birth rate in the Region.

The information released today concerns women in childbearing ages, 18 to 49 years old, since at the NUTS II level the sample is only representative for the female population.

These results show that between "desires" and "reality" there is a significant gap. Indeed, the majority of women (69.3%) are still far from reaching their desired fertility, with only 25.1% of women actually having the number of children they desired.

Despite having less than 1 child on average, women with a high education level reported the maximum desired fertility when compared to those with medium and low education

The average number of children tends to increase in line with women’s age and it is higher for married women (1.65) and for those who at most completed a lower secondary education (1.37).

On average, the expected fertility declines with age, but rises for women with a migratory background (1.85) (i.e., women born outside of Portugal or born in Portugal but at least one parent wasn’t born in Portugal), for married women (1.89) and for those with secondary education (1.81).

Among childless women, the majority reports that it is very important for the decision to remain without children, their own will and the fact that motherhood is not part of their life project

Among women aged 18 to 49, 10.4% do not have nor intend to have children. Of these women, the majority reported that their own will and the fact that motherhood is not part of their life project are very important reasons to remain without children. Moreover, for about half of these women, the fact that they did not feel prepared to undergo pregnancy/childbirth and financial reasons were also consider as very important reasons on making the decision to remain childless.

Among childless women that still intend to have children (34.6%), in addition to their own will and the fact that motherhood is part of their life project, the overwhelming majority stated housing conditions and professional stability/progression as very important reasons on making the decision to have at least one child.

Women with high education tend to have their first child later (30.2 years, on average) than women with secondary education (25.5 years, on average) and low education (22.8 years, on average). However, regardless of whether they had their first child sooner or later than they desired, the vast majority of women (84.9%), aged 18 to 49, pointed out their will to be a mother as a very important reason for having the first child at the age they did. This reason was followed by: having a spouse/partner with the right profile (65.0%), job stability (63.0%), spouse/partner's desire (62.1%), housing conditions (58.8%) and the possibility of reconciling family and professional life (52.8%).

As indicated by women aged 18 to 49 in a relationship (married or not), the tasks of washing and taking care of clothes (69.2%), preparing daily meals (54.5%) and cleaning the house (50.6%) are mainly attributable to themselves. Contrary, the responsibility of making small arrangements in the house is commonly designated to their spouse/partner (65.6%).

Regarding childcare, the majority of women in a relationship reported that they are usually responsible for dressing and checking if the children are properly dressed (65.1%), staying at home when they are sick (59.8%) and taking them to the doctor (53.6%). An equal share of tasks with their spouse/partner is more common (79.5%) in the responsibility of playing and/or participating in leisure activities with the children.

The results indicate that the majority of women are satisfied or very satisfied with the division of domestic tasks (70.1%) and childcare tasks (78.5%) between themselves and their spouse/partner.

The overwhelming majority of women consider that government incentives are needed so that people can have more children: 94.1%

The overwhelming majority of women, aged 18 to 49, living in the Region, believe that birth rate should be encouraged at the level of the general population, with 94.1% of women recognizing that government incentives are needed so that people can have more children.

In the sphere of working conditions, “making working hours more flexible for mothers and fathers with young children” was the incentive measure most commonly referred by women as an important or the most important measure (82.0%).

Regarding access to occupation services for children (daycare centers, kindergartens and ATL services), most women considered that expanding the network and access to these services (78.9%) is an important or the most important measure to encourage birth rate.

In the context of the income of families with children, the measure “increase subsidies related to education, health, transport, housing and food for households with children” was identified as an important or the most important measure by 77.5% of women.

Among other reasons, “assign tax incentives to employers with management practices that support workers with children”, was considered by 77.9% of women as an important or the most important measure to encourage birth rate. 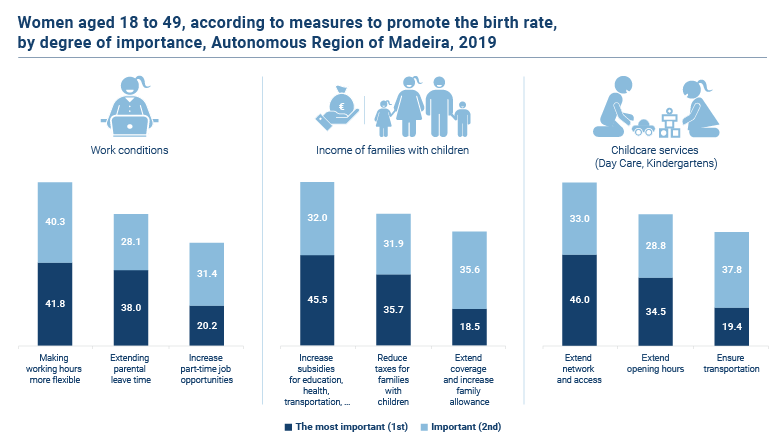