The Regional Directorate of Statistics of Madeira (DREM) conducts annually the Survey on Income and Living Conditions (EU-SILC) in the Autonomous Region of Madeira, under the guidance of Statistics Portugal (INE), since EU-SILC is a statistical operation of national scope.

In this context, DREM releases today, on its website, some provisional results of EU-SILC, carried out between March and September 2020, on previous year incomes. As a result of the public health measures related to the COVID-19 pandemic, namely confinement and social detachment, the survey conducted in 2020 was carried out exclusively through telephone interviews (CATI, or Computer Assisted Telephone Interviewing), the size of the annual subsample was increased and the collection period was extended until September.

Median equivalised disposable income in the Autonomous Region of Madeira stood at EUR 9,045

The median equivalised income in the Autonomous Region of Madeira was EUR 9,045, below the national value, which was EUR 10,800.

The at-risk-of-poverty rate (calculated with the regional at-risk-of-poverty thresholds) indicates that the Autonomous Region of Madeira and Azores have the highest values (17.3% and 20.4%). Alentejo (14.7%) had the lowest value.

Persons in a very low work intensity condition are those aged less than 60 who, in the income reference period, lived in households where adults aged 18-59 (excluding students) worked on average less than 20% of the labour potential. This situation can enhance the risk of social exclusion of a household.

In 2019, the proportion of population under 60 years old living in households with very low work intensity stood at 9.2%, dropping by 0.2 p.p. from 2018. The highest value was registered in the Autonomous Region of Madeira and the lowest in Centro (3.9%). The national average was 5.1%, recording a 1.1 p.p. decline.

Severe material deprivation rate in the Region increases to 11.0%

Material deprivation, i.e., the lack of access to a set of economic needs and durable goods, is also a factor that can enhance the risk of social exclusion.

At-risk-of poverty or social exclusion rate in the Autonomous Region of Madeira in 2019 was 32.9%

In the context of Europe 2020, an indicator was set out regarding the population at-risk-of-poverty or social exclusion, joining the concepts of relative at-risk-of-poverty rate – people with an annual equivalent income below the poverty threshold – and severe material deprivation with the concept of very low per capita labour intensity.

Two indicators – the Gini coefficient and the S80 / S20 ratio - make it possible to assess asymmetry in income distribution in the Autonomous Region of Madeira and in the country.

The Gini coefficient synthesizes into a single value the asymmetry of the income distribution, assuming values between 0 (when all individuals have the same income) and 100 (when the total income is concentrated in a single individual). In the Autonomous Region of Madeira, this indicator had the value of 30.8%, below the national value (31.2%). The Autonomous Region of Azores had the highest inequality 34.5%) and Algarve the lowest (29.4%). 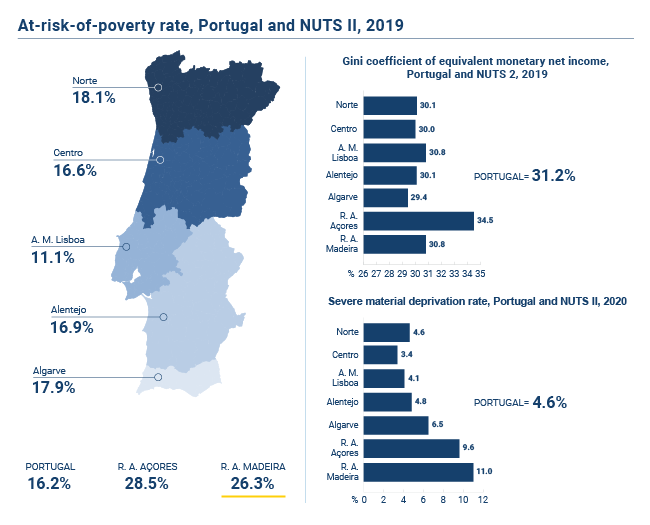