DREM releases the first results of the Agricultural Census 2019

The Regional Directorate of Statistics of Madeira (DREM) releases today the first results of the Agricultural Census 2019 (RA19). The interviews with the farmers took place between October 2019 and November 2020.

This operation was carried out by Statistics Portugal (INE) in the country, while in the Autonomous Region of Madeira, DREM was responsible for the coordination of the data collection.

The results made available today are just a small fraction of what is going to be released next March 2021, when the final results will be ready to be disseminated.

Number of holdings stable in the last ten years, but the agricultural land dropped

According to the RA19, there are 13,567 agricultural holdings in the Autonomous Region of Madeira, down by 44 over 2009, corresponding to a slight 0.3% decrease. This is the smallest drop ever between censuses. In fact, between 1977 and 1999, the number of holdings decreased sharply, but after 1999 the pace slackened.

Area of banana and sugar cane plantations with a significant increase, while the area of potato and vineyards decreased sharply

All UAA components dropped, mainly the kitchen gardens (-29%) and arable land (-26%). In permanent crops (-7%) and permanent grassland (-1%), the decrease was less pronounced.

Temporary crops account for the reduction of arable land, mainly because the area of potato (-52%) and horticulture (-29%) greatly declined. On the contrary, sugarcane had an impressive growth (+52%).

In Portugal, the number of holdings dropped by 5%, while the UAA increased by 7%.

More machinery in the agricultural holdings of Madeira

Compared to 2009, the number of motocultivators increased by 32%, motorbikes by 54% and brushcutters by 217%. However, farm tractors declined by 19% and power sprayers by 29%.

Familiar-based agricultural population dropped as well as the labour force

According to the RA19, the family-based agricultural population, i.e. the persons who belong to the household of sole agricultural holders, whether working or not in the holding, stood at 37 thousand, below the 41 thousand of 2009, meaning a drop of 9%.

Of the total sole agricultural holders, 56% are men and 44% women. The mean age of sole agricultural holders increased to 62 years, up by two years from 2009. Regarding the highest completed level of education, 6% declared that they could not read or write, which is a significant drop from the 15% of 2009. The percentage of sole holders with higher education was 7%, which compares with 3% in the previous Census. 43% of the sole holders declared they had some type of agricultural vocational training. In overall, the time spent working in the holding by family labour force dropped from 10 years ago. The family labour force measured in annual work units (AWU, in which 1 UTA corresponds to 225 working days, 8 hours per day) shows there has been a reduction of approximately 27%.

Regarding the different types of non-family labour force, measured in AWU shows that there has been a 21% drop. Notwithstanding, the regular permanent workers increased in number by 10%. 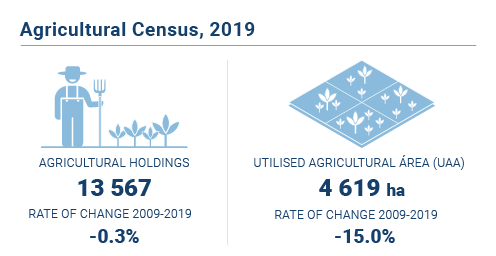