According to EU regulations, Statistics Portugal will send to Eurostat, until the end of the current month, the first notification of 2021 of the Excessive Deficit Procedure (EDP).

The estimate of Net lending of the Regional Government of Madeira (RGM) for 2020 stood at 120.5 million euro. After seven consecutive years in which the RGM accounts recorded a surplus (in 2019 it reached 38.3 million euro), the 2020 deficit reverses that trend. However, this can be explained by the crisis generated by the COVID-19 pandemic that had an estimated impact of 137 million euro, associated to prevention, containment, mitigation and economy recovery in the scope of the COVID-19 pandemic. Without this amount, the RGM would have continued to have a surplus in its accounts. It must be highlighted that the losses associated with non-generated revenues are not included in the abovementioned 137 million euro, such as the significant decrease in tax revenues, that in Public Accounting, dropped by 103.7 million euros (-10.9%) compared to 2019. This loss reflects the pronounced reduction in the economic activity during 2020, and led to a drop in the total receipts of the RGM between 2019 and 2020, while, in the other hand, the total expenditure increased, due to the growth in current expenditures, derived by the measures taken by the Regional Government to fight against the consequence of the pandemics.

The Regional Gross Debt stood at 5,109.0 million euro, having increased by 446.0 million euros (+9.6%) compared to 2019, and is the highest value ever recorded for this macroeconomic variable. This significant growth, is exclusively due to a bond loan of 458 million Euros asked by the Region, following the authorization granted by the State to the Region in order to get a loan to cover exceptional financing needs, deriving directly or indirectly, from the COVID-19 pandemic. Without this loan, the amount of gross debt would have continued the downward trend that started in the previous quarter and would be around 4.651 billion Euros. 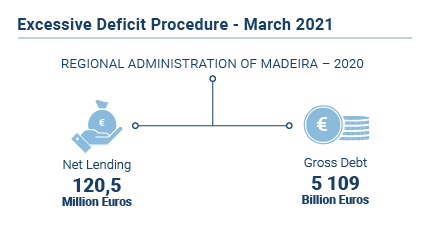